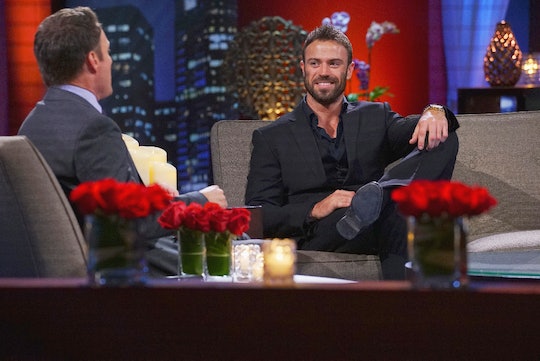 What Does JoJo Think Of Chad? The 'Bachelorette' Isn't Saying Much

Chad Johnson is, without a doubt, one of the greatest villains in Bachelor Nation history. His obsession with meat, milk, and protein powder, predisposition to anger, and undeniably golden one-liners all combined to make him one of the most memorable (and gif-able) suitors ever. Chad was sent home way back in Week 4, but his influence stretches far further than that, thanks to some post-show social media antics (and an upcoming appearance on Bachelor in Paradise). But now that they're out of the Bachelorette house, what does JoJo Fletcher think of Chad?

JoJo has kept her comments on the current season very restrained, as it airs. Of course, she's already lived this drama, so it makes sense that she'd want to stay out of the fray (for the most part) right now. But JoJo is active on Twitter and Instagram, and I can't imagine that she's missed all of Chad's bizarre, attention-seeking Twitter outbursts and Instagram call-outs.

As the show was airing back in the beginning of the season, Chad would make snide little comments here or there, but nothing outrageous. He was still on the show, after all – he couldn't be an outright jerk and maintain the illusion that he was still a contender for JoJo's heart. But once Chad was eliminated midway through a two-on-one date with Alex Wotykiw, left in the woods to his own devices (devices which included horror movie villain whistling and glass-scratching, because why not), he sure let loose with his opinions – aka, throwing all the shade.

While some of Chad's fellow contestants/former enemies have replied to his shadiness, JoJo has remained quiet. She also didn't deign to respond when Chad essentially slut-shamed her on Twitter for making out with all the dudes.

High five, JoJo – rise above. Also, Chad: he does realize what show he was on, right? It's The Bachelorette, not The Puritan Bachelorette. Some kissing does tend to happen before you get married to someone.

Despite his antics, in a recent interview with Glamour after the Men Tell All episode taping, Chad seemed to harbor no ill-will towards JoJo – though he did question her decisions and implied that maybe she wasn't always genuine.

"[My] opinion of JoJo now is the same as before. She seemed genuine today. There are times when she definitely did not. She obviously made some f--ked-up decisions. I think she’ll obviously realize that depending on what her outcome goal is."

Though, unlike Chad, JoJo has remained relatively quiet about her opinions on this season (so far), she did let a few things slip in her blogs about the season for People.

For the most part, JoJo tried to be fair in her take on Chad's behavior. In her commentary on the "sex confessions" date episode, when Evan Bass decided to publicly lay into Chad to get back at him, JoJo acknowledged that "when Chad stepped up [on the stage], he was angry. And now, watching it back, [she] understand[s] why." On the other hand, she admitted that watching that blow-up between the suitors "scared" her and that "violence is never the answer."

All in all, JoJo is going out of her way to be extremely fair to all of her suitors and not gossip about any of them post-show. Whether that's a clause in the NDA or her being kind (or some combination of the two), I don't know.

JoJo's recent interview with People really put that "taking the high road" thing in perspective. In it, JoJo confessed that Chad was initially one of her "top guys," pre-drama, and that though the other suitors assumed Chad couldn't have hid his true nature from her, she honestly had no idea what was going on between him and the others.

JoJo was also aware that Chad's antics made for great TV: "Watching Chad is like one of those things where you want to look away from something but you can't."

But in spite of it all, JoJo is definitely taking the high road. "He wasn't meant to be my husband," she said. "But I wish him the best of luck. I'm going to let Chad do Chad!" Guess she's over that "naggy" crack he made about her!