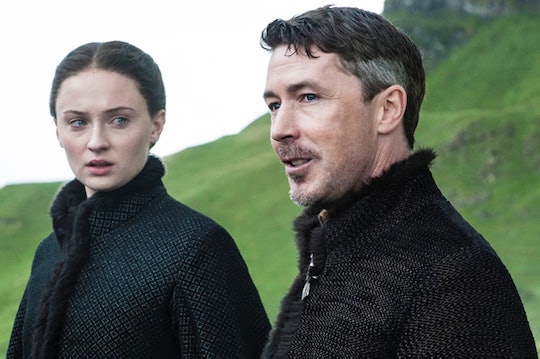 What Does Littlefinger Want From Sansa On ‘Game Of Thrones'? He Isn't Done With Her Yet

Just when our girl Sansa thought she was out from under Littlefinger's, er, thumb, he pulls her right back in again. On Sunday's episode of Game of Thrones, the Knights of the Vale ended up stepping in during the fourth quarter of the Battle of the Bastards and pretty much slaying it. But remember, this was thanks to Sansa's crafty letter in Episode 8, and we know Petyr Baelish never gives anything without getting something in return. So, what does Littlefinger want from Sansa on Game of Thrones? Given the fact that Baelish shows up in the Season 6 finale promo, basically telling Sansa that she knows what he wants, we have to assume that he is after Catelyn Stark's daughter for her body, yet again.

You guys remember that, right? When Petyr Baelish was so enchanted with Sansa because she's the daughter of his friend who'd died before he could profess is love to her? And then, to "protect" Sansa, he had her dye her hair black so that she was almost the spitting image of said dead mom? Let's admit it, despite Littlefinger being a manipulative little man on Game of Thrones, we all believed him at least to some degree when he promised to keep Sansa safe way back in Season 5 of Game of Thrones.

Now, Sansa has asked a favor from Littlefinger to end all favors. I mean, it's not like he had much going on at the Vale, except running the place as Lord Robin Arryn's Uncle Petyr and being all manipulative. Basically, just being himself. And he did offer to help Sansa when she met with him with Brienne at her side. But she'd refused him then, and rightfully so, since he's basically a snake with a goatee. Still, Sansa asking for Littlefinger's help via a secret letter in Episode 8 and then getting it in Sunday's episode of Game of Thrones will likely have great consequences.

So what does Littlefinger want from Sansa now? Obviously to play out his Catelyn Stark fantasies on the poor girl, but besides that, the dude is so after control of the North. And in order to gain control of the North, he needs Winterfell. To get Winterfell, he needs to convince Sansa that he's not a total piece of sh-t. Will he try to marry her now, in order to gain control over yet another piece of Westeros? At this point, you can't really put it past him since the guy has no shame, but Sansa isn't the little dove she was when he dropped her off to the Boltons and was all like, "Peace! I got me some land to rule now that I killed my wife, ya'll!"

Regardless of whether or not Petyr Baelish tries to win over Sansa again or convince her that he's not all bad, it's really up to her. She's survived this far on Game of Thrones and has only gotten better at playing the game, so to speak. But she's also seen some sh-t by now. You don't need your abusive husband to his pet dogs and walk away from it as a softened lady-in-waiting.