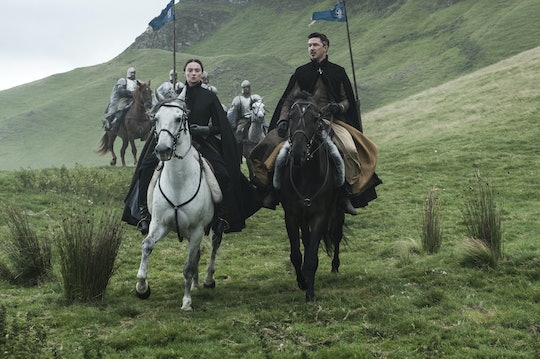 Will Sansa Kill Littlefinger On 'Game Of Thrones'? She Wants Revenge

So for those of you who are keeping up with Game of Thrones [spoilers for Epsiode 4, Season 6 ahead!], can we all just agree that Sansa is off to a well-deserved, fantastic start? We all remember where she was last season; living in Winterfell, tortured and raped by her new husband Ramsay Bolton with no clear end in sight. And we all remember who put her in that position: Lord Petyr Baelish, aka Littlefinger. So now that Sansa Stark has some hefty back-up, will she kill Littlefinger?

Let me take you on a little trip down memory lane, shall I? Sansa Stark has been a pawn in the hands of powerful men since Season 1 of Game of Thrones. Whether it was her father, the great Warden of the North and super honorable Eddard Stark, allowing his daughter to be promised to Joffrey Baratheon (though to be fair, Ned did have a change of heart near the end, there), or being ridiculed and frightened as Joffrey's plaything, or being raped and abused by Ramsay Bolton, Sansa's only luck was incredibly, horribly bad luck. And there was one man who was (arguably) the designer of all her misfortune: Her mother's old friend, Petur Baelish.

As we remember, Petyr Baelish was responsible for bringing Ned to King's Landing, and orchestrating the murder of Ned's mentor, John Arryn. He had Joffrey killed with Lady Olenna Tyrell and in the process, had Sansa (and consequently, Tyrion) implicated for the crime. He secreted her off to the Vale of Arryn and subjected her to one of the most awkward boyfriend/dad kisses ever. Then he shipped her off to Winterfell with promises of power and fortune... but let her rot with the Boltons. So... yeah, I'm feeling like Sansa might not be a huge fan, and I can't blame her.

Now that Sansa has some pretty solid people in her corner — Brienne of Tarth pledged to her, which hasn't worked out for her previous employers but I'm rooting for the third time being the charm, and most importantly, her half-brother, Jon Snow — I think we're going to see Sansa finally get her groove back. She's done being a pawn, and her speech to Jon about taking back Winterfell made that perfectly clear. (Did anybody else tear up when two of the Stark kids were finally in the same room?)

Sansa is spoiling for a fight, and she's got the power to back her up this time around. But will she turn on Littlefinger? I mean, we all know she's going to want Ramsay Bolton's head on a spike, but it's possible she may still trust Littlefinger. And his feelings about her seem to be more complex than his usual puppet master roles with everyone else in his life. He seems to trust her, even when he is using her.

Many seasons ago, Littlefinger told Sansa not to trust anyone. And here's the thing... I think she listened. I think she has been playing her own game with Littlefinger. And now that she has no use for him any longer, I think she might get something out of Littlefinger at last. A little thing called vengeance.