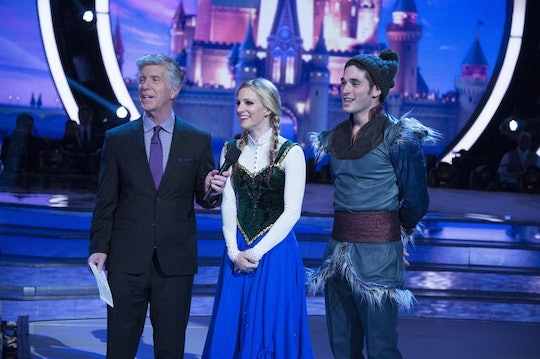 Maks Is Making His Comeback On 'DWTS'

Being given the chance to stand in for one of the pros on Dancing With the Stars is like being treated to the cool kids’ table at lunch, only to have to give up the seat once Regina George gets back. That’s kind of the situation Heather Morris’ stand-in partner is in right now. So what does Maks Chmerkovskiy’s return mean for Alan Bersten on DWTS? Simply put, it means that Bersten goes back to being part of the DWTS troupe, but since this was Bersten’s longest stint filling in for one of the pros, it could mean that he’s that much closer to eventually becoming a pro himself.

In the meantime, though, as Chmerkovskiy steps back into his role as Morris’ partner — fully recovered from the calf injury he incurred during rehearsals at the beginning of the season— Bersten will be back at working hard as a member of the DWTS troupe. They might not be the official pros of the show, but they also work with the pairs during rehearsals and provide much needed backup dancing through different opening numbers and routines as the pairs need them.

Sure, it’s going to be a different way to play out the remainder of Season 24 for Bersten, but the experience alone afforded him the ability to show off all that he can do and Chmerkovskiy is rooting for him too.

In an interview with Entertainment Tonight, Bersten said that with the "Toxic" choreography he planned for himself and Morris, Chmerkovskiy was supportive in signing off on it and spoke to Bersten about what a great opportunity it was to be able to sub for him while he recovered. Bersten also confirmed that although he’s no longer Morris’ partner on DWTS since Chmerkovskiy is back, he’ll be staying on as a troupe member and cheering on both Morris and Chmerkovskiy.

On Week 5’s episode, Chmerkovskiy was there to announce that he’d be returning and to jokingly tell DWTS host Erin Andrews, "Alan’s officially fired," but in reality, being able to shine as Morris’ partner and take her this far might have been the best thing for Bersten’s career on DWTS.

Chmerkovskiy’s return does mean that Bersten will be stepping down as Morris’ partner, but judging from the scores he’s afforded himself and Morris and the progress he helped her make on the show, it’s only a matter of time before Bersten gets that promotion he so deserves.