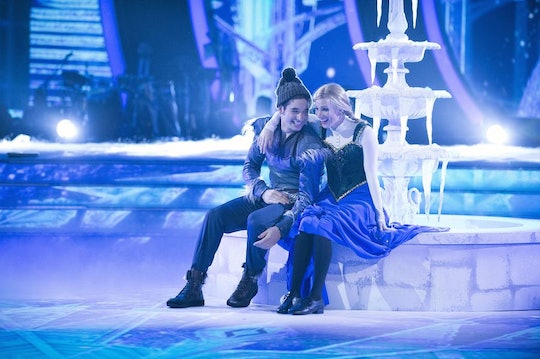 Alan Bersten Could Get A Big Promotion On 'DWTS'

Some might say he’s paid his dues as a troupe member on the show for several seasons now, even filling in for Mark Ballas during Season 22 for a while, much like he’s done for Chmerkovskiy this season with Morris. Bersten spoke with Entertainment Tonight about stepping down as Morris’ partner now that Chmerkovskiy will be back for Monday night’s episode and although leaving the dance floor is bittersweet for him, he seems to be confident that his time filling in might mean something big for his future on DWTS.

"I've been thrown in a lot, but this was by far the best experience, the longest experience," Bersten said. "I feel like when there's a spot that opens up, hopefully I will be the next one. I feel like, knock on wood, I hope this next season is my time." Given Bersten’s experience on DWTS and the amount of time he’s spent filling in for different pro dancers, it would make sense for him to get a promotion for all his hard work.

He also told Entertainment Tonight that even though Chmerkovskiy has been on hand to give direction while he rehearsed with Morris before the live shows and helped choreograph their numbers, the "Toxic" routine for Vegas Week was actually all Bersten. At this point, he’s definitely proven himself to not only be versatile enough to step into the fold as soon as he’s needed, but to also be able to come up with a dance number to wow the judges and keep Morris on the show.

On DWTS, the cycle of progression typically goes that as spots open up for pro dancers, the troupe members are given the opportunity to graduate from their stature and slip into place as the new pros. In fact, Chmerkovskiy’s own wife, DWTS pro dancer Peta Murgatroyd, started out as a troupe member and became a pro during Season 13. Now, she’s easily regarded as one of the most beloved pros on the show.

Bersten’s time to be a pro on DWTS has got to be coming and right now, it’s really only a matter of being able to fit him in with all of the other pros that fans have come to love. But, as Bersten told Entertainment Tonight, if a spot opens up on DWTS, there’s a good chance it could be his.