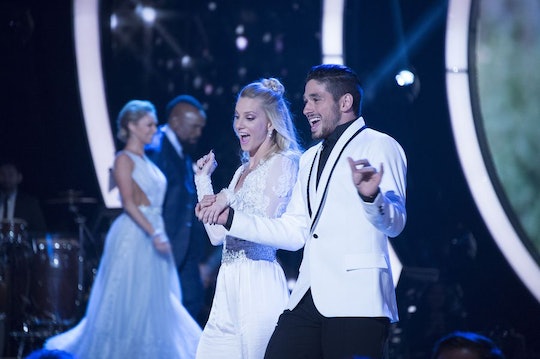 Alan Bersten Is On His Way To Becoming A 'DWTS' Pro

The pros on Dancing With the Stars may be amazing at what they do, but it’s the understudies of sorts who come out from the shadows to take over when they’re needed who are the true saviors of the show. This has already happened once this season, when Maks Chmerkovskiy injured his calf and had to sit out, and Alan Bersten became his replacement for his star partner Heather Morris. So who is Alan Bersten on Dancing With The Stars?

Unbeknownst to some of the more casual viewers, there’s something of a behind-the-scenes thing that goes on with the pro dancers. Each season, DWTS has a troupe of dancers who act as the backup dancers during bigger performances and, if necessary, step in for a pro, much like Bersten is currently doing. If they’re lucky, a member of the troupe might get promoted to pro status eventually, as long as a spot opens up.

This isn’t the first time Bersten has stepped in to take over for one of the pros, though. During Season 22, he danced with UFC fighter Paige VanZant when pro Mark Ballas suffered from a back injury. In the past, current pros like Sharna Burgess and Peta Murgatroyd also started off as troupe dancers like Bersten, so he’s definitely on his way to hitting the big leagues.

Before he was brought in on DWTS though, Bersten competed on Season 10 of So You Think You Can Dance and made it to the Top 12 contestants on the show. But according to Us Weekly, Bersten only competed on the show because at the time, his older brother did too. Obviously it all worked out for the Minnesota native though, because he’s been an active part of the troupe on DWTS since Season 20 and has helped Heather Morris keep her scores in the 30’s each week this season.

Bersten is a former member of the Burn the Floor live dance production and at almost 23, he’s obviously worked hard to get to where he is. Even so, he apparently still knows where he’s from. Between the Instagram posts about DWTS and his shirtless gym selfies, fans can find some adorable photos of Bersten with his mom. If it was possible to love him any more, this definitely did it.

Bersten was also part of the most recent DWTS Live tour, so he’s never really not been dancing throughout his career so far. That’s probably why he can so effortlessly step into Chmerkovskiy’s shoes and act as Morris’ talented partner. He’s already managed to make such an impression as a dancer on DWTS that it wouldn’t be all that surprising to see him come up as a pro very soon.