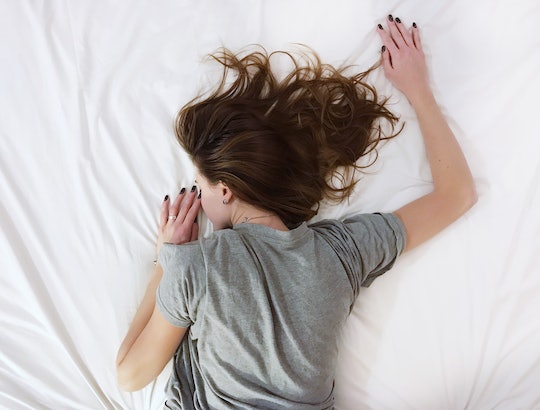 This Is What Morning Sickness Actually Feels Like, According To Real Moms

Let me just clear the air right away: I didn't have morning sickness when I was pregnant. I know, I know. You don't have to like me anymore. But I have arrived on many pregnant friends' doorsteps with saltines and soda, one of whom offered the most blatant explanation of morning sickness by announcing her second pregnancy with a photo of a toilet bowl and the caption: "My view for the next nine months." More than 50 percent of pregnant women experience morning sickness, according to the American Pregnancy Association (APA), but what does morning sickness feel like?

"In a nutshell, it felt like I was really hungover and nauseous for months, with no end in sight," Illinois-based Laura Kaster tells Romper in an email interview about her experience when she was pregnant with her son five years ago. "It also wasn't restricted to the morning — I was sick all day, every day, and my only relief from it was sleep." Kaster says her morning sickness lasted almost five months.

Like Kaster, if you are experiencing morning sickness or have in the past, then you know that the feelings of nausea, food aversions, and general gag-worthy moments are not limited to the morning and may occur all day. According to What To Expect, symptoms typically start before week nine of pregnancy and are often the first sign of a bun in the oven.

At 17 weeks pregnant with her second child, Molly Antos of California tells Romper morning sickness is nothing short of fresh in her mind, especially because "barfing four times a day while trying to take care of a toddler" isn't exactly her idea of a good time. Like Kaster, she describes it as similar to "being constantly hungover for weeks on end with absolutely zero end in sight." She also says, "Morning sickness is like being trapped in a case of nausea for three months without any hope for recovery."

Some women say that, while persistently nauseous, they never actually vomited as a result of morning sickness, while others say they wore the toilet as a hat for the better part of their pregnancy, Cosmopolitan reported.

There are some extreme cases of morning sickness, known as hyperemesis gravidarum, that include severe nausea, weight loss, vomiting, and electrolyte disturbance, according to the APA. One famous case of this is Duchess Kate Middleton who suffered from the condition during both of her pregnancies, reported ABC, and required increased supervision and bed rest. If headaches, dehydration, decreased urination, and/or a weight loss of 5 percent or more of your pre-pregnancy weight comes with your morning sickness, then you should speak to your doctor about what measures you might take to ensure a health pregnancy, noted the APA.

Because royal or not, morning sickness is no joke.