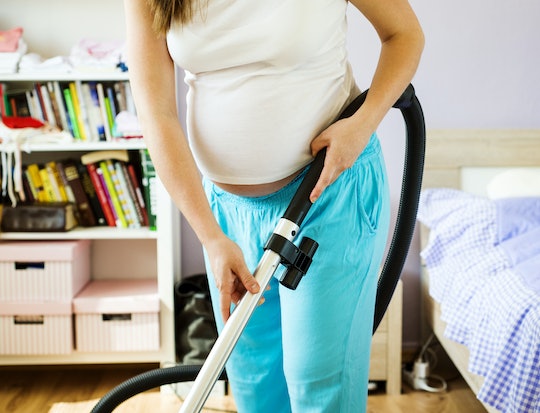 The many physical symptoms of pregnancy are well known — nausea, swelling, aches and pains, and constant fatigue only being a few. Less talked about are the emotional and mental states that women go through during pregnancy. Phases of excitement, anxiety, worry, and joy are all common, but even more so, is the nesting phase. But, what does nesting mean during pregnancy? And, where does the need to nest come from? As it turns out, the nesting phase has a long evolutionary history.

According to the American Pregnancy Association, the nesting instinct is known as the incredible desire to get your house ready for your baby. The nesting phase is typically brought on by a bout of energy to clean, organize, decorate, and prepare for your baby. It usually can occur at any point during your pregnancy, but is typically strongest during the last few weeks. Some women even say that wanting to nest means that labor is imminent.

Nesting is a behavioral phenomenon, though no one seems to know exactly what causes it, as Parents mentioned. It is common in pregnant mammals, and it occurs for a good reason — making a safe, warm, comfortable home for their babies increases a chance of survival.

Nesting can bring about overwhelming and strong urges to make changes in your environment, too. According to a study published in Evolution and Human Behavior, nesting can even include the sorting of people, as seen in a tendency to retreat to the comfort of home and the company of familiar people. All of these instincts have a strong root in biology and evolution. As the study mentioned, years and years ago, our ancestors may have nested as a method of self-preservation; with predators being an actual thing, nesting was nature's way of telling pregnant women to stay close to home.

For women who feel the nesting instinct, it can be very real. But, some women don't feel it at all, and that's normal, too. As Apartment Therapy noted, there are many other things you can do with your baby-free time other than nest. Talking a walk, reading, or making a meal are all ways to spend your time before your baby arrives. I never felt the urge to nest, and now, with two young kids, I certainly don't regret not spending my pre-baby time cleaning and organizing. I do miss those warm, evening strolls around the neighborhood, though.