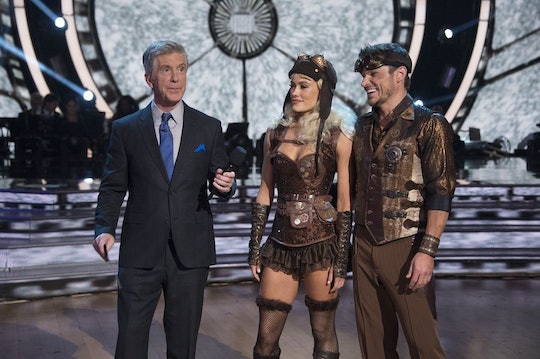 Nick Lachey Has Made His Feelings About 'DWTS' Well Known

Being the experienced performer that he is, I expected Nick Lachey to make it all the way to the end on Dancing With the Stars this season. But alas, that was not the case, given his elimination last week. However, he didn’t necessarily go out on a sad note since he seemed immediately grateful for his time on the show. Even so, being eliminated is never easy and it makes you wonder, what does Nick Lachey think of Dancing With the Stars? He seems to have no regrets about his time spent on the show this season, which is kind of what you’d expect from a class act like him.

After his elimination at the end of the Week 6 performances, Lachey told E! News that, more than anything, he’s grateful to have had the experience. "I gained a lot more from this than just the Mirrorball, so I'm very, very grateful for that," he explained. "Of course you're disappointed. You don't do something like this and want to go out earlier than the championship. That's human nature."

And while he's definitely disappointed to no longer be competing, he seems happy with everything he achieved and the work effort he put into it. "If I had to measure this in terms of effort and in terms of commitment, I know that I gave it everything I had and tried as hard as I possibly could," he added during the interview. "So that's why I could walk away with this feeling of success and accomplishment."

Honestly, I’d expected nothing less from Lachey and even though he and pro partner Peta Murgatroyd are out as a team for the season, he knows that he got this far with her help. "As I said backstage, poor Peta can only shine a turd so much," Lachey joked. "She deserves a lot of credit for shining me this far." Even though Lachey was eliminated on DWTS, he did manage to place nine out of 13 for the season, so it could have been worse for the singer.

Being eliminated before his wife, fellow contestant Vanessa Lachey, just means that he’ll be able to cheer her on from the sidelines now and, from the looks of it, that’s what he intends to do. "She and Maks [Chmerkovskiy] are on a great trajectory, I think they’re right there where they wanna be. I think they get better each and every week," Lachey said on Good Morning America following his DWTS elimination. "I'll be rooting for her every week." He also added that, since he can now spend more time with their three children, he also has the time to "sit front row and cheer my wife on."

There might have been some friendly competition among the couple and their pro partners, who are also married, but now that one member of the Lachey family has been eliminated on DWTS, he seems ready for his wife Vanessa to take home that Mirrorball trophy instead. "If I can’t win the whole thing, then of course I want to see my wife win, so I’ll be there to support," he told People following his elimination Monday night. "There’s gotta be a trophy in the house. We’ve already cleared the space for the Mirrorball. Even though I didn’t bring it home, there’s still hope for the Lachey household."

And, in true Nick Lachey fashion, he took to Instagram to thank his fans and give a shout out to his partner throughout the whole process. "I am so grateful for my time on @dancingabc I've learned so much, made lifelong friends and had a whole lot of fun in the process," he wrote in the caption, while adding: "@petamurgatroyd you are incredible. Thank you to everyone who voted for us along the way, we couldn't have done it without you!"

I didn’t expect Lachey to harbor any ill will toward the show and all of these interviews and remarks he's done just continues to solidify that fact. He clearly had a wonderful experience, regardless of when he was sent home.