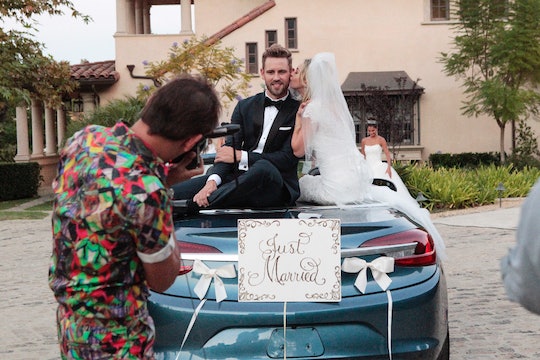 Nick May Find Out About Corinne's Nanny Soon

Every so often, there's a family member who appears in passing on a Bachelor Nation show and inadvertently becomes the star of the season. During Season 20 of The Bachelor, fans were charmed by future Bachelorette JoJo Fletcher's wine-chugging mom. This time around, it's all about Raquel, Corinne Olympios' nanny. While Raquel was only onscreen for the briefest of moments – long enough to bring her young charge a bowl of cut cucumbers – she made an indelible impact on Nick Viall's season and maybe even the show's history. But what does The Bachelor Nick think about Corinne having a nanny?

Beyond being sexually aggressive (which, in and of itself, is not at all a bad thing, despite the other women's less-than-pleased reaction to her behavior), Corinne is, at this point, most known for her nanny. Apparently, it's also something of a sore spot. The topic of Nanny Raquel blew up after the season premiere aired, leading Corinne to clap back at the nanny-less haters in a since-deleted tweet: "Everyone needs to relax about the nanny thing. Raquel is part of my family so calling her a housekeeper or cleaning lady is disrespectful."

Despite Corinne's defensiveness, her not-so-secret nanny is set to come to the forefront in an upcoming episode, according to a promo shared by TV Guide. In the clip, Corinne explains to fellow contestants that Raquel is her nanny. She also details what exactly it is Raquel does for her. For anyone who thought that Corinne might be playfully describing someone who was actually her personal assistant as her nanny, it's now clear that that isn't the case. Raquel does Corinne's laundry, makes her meals, and knows just how she likes the dressing on her lemon salad. She's really and truly her nanny.

This clip was probably shared in advance because Corinne's nanny-having will be revealed to Nick in this episode, with the first confession to the other women acting as a precursor to the bigger reveal. We do know that Nick is set to find out about the nanny this season, given that he was quizzed about it on a recent Jimmy Kimmel Live appearance alongside his exes Andi Dorfman and Kaitlyn Bristowe. "While I certainly appreciate the potential red flags of a grown woman having a nanny," Nick admitted. "I also thought to myself, 'Huh, what are the benefits? If this works out, do I also get the nanny?'"

Clearly, Nick wasn't particularly shocked or dismayed by the news, since he joked about it. Whether this is because he chose Corinne and came to terms with his 24-year-old bride-to-be having a nanny or because she wasn't his final choice in the end and thus the existence of Raquel has no impact on his life, we don't yet know. It remains to be seen whether Corinne's inability to make cheese pasta will be a deal-breaker for Nick, or if the Miami businesswoman will walk away from the final two rose ceremony an engaged woman.