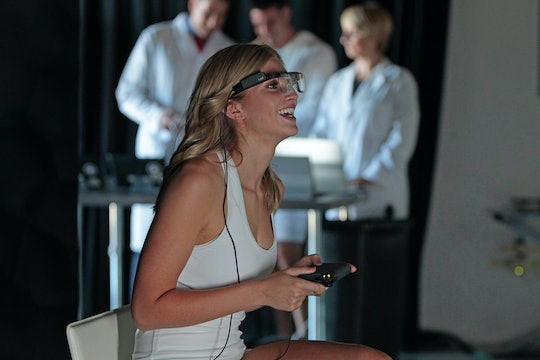 What Does Olivia Think Of 'Olivia's Mouth' On Twitter & Jokes About Her? She's A Surprisingly Good Sport

The internet can be a very mean place sometimes. Case in point, a Twitter profile called "Olivia's Mouth," named after the jaw-dropping mouth gape of The Bachelor contestant Olivia Caridi has accumulated over 20 thousand followers. Why? Because people love to hate on Bach's Olivia. But just what does Olivia think of "Olivia's mouth" jokes and the Twitter account? Based on the former news anchor's own Twitter account, it's safe to say Olivia isn't mad at "Olivia's Mouth" or any of the memes and jokes her expression has garnered.

Also safe to say, Olivia doesn't mind attention. In fact, she seems happy to take on the "crazy girl" role in the mansion. And who could forget when she jumped out of a cake and performed a strip-tease that even had her in giggles. So, I'm pretty sure that she can take a pointed joke or two. But here's the thing: I have a problem with this meme.

Making fun of someone's candid expression is one thing. People make funny faces sometimes, and they're funny for a reason. And you can't really expect to go on national TV and not make some funny faces. But Olivia's jaw-dropping gape isn't that particularly funny to me. The expression reads as a bit misogynistic because it plays on the "bimbo" stereotype that is pretty uncool towards women. Amirite?

But like I said, here's proof that Olivia doesn't seem to be bothered by the online mockery.

I also can't fathom a world where more than 20,000 people would get behind a Twitter account with the sole purpose of making fun of a woman's facial expression.