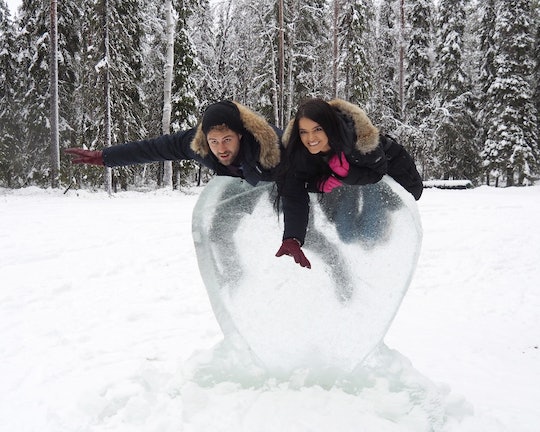 As The Bachelor heads into its final week, the focus has narrowed to Nick's final two women, Vanessa Grimaldi and Raven Gates. Fans are still pretty split about who will win Nick's heart in the end, and they're also pondering questions about what each of the women have been up to after the end of the season. Some even hope to find clues about who the winner is via social media. But, in particular, many are interested in what the relationship is between Nick's final two. For one, what does Raven think of Vanessa on The Bachelor?

There's no indication on Raven's social media, post-show, that she particularly likes or dislikes Vanessa. She follows Vanessa on Instagram, but (at last check) not on Twitter, though that probably doesn't mean much of anything — neither Vanessa or Raven is very active on Twitter anyway. There are no photos of the two hanging out, but there's also no subtle (or not-so-subtle) shade thrown by Raven at her "rival" for Nick's affections. If I had to guess, I would say that the two women are not particularly friendly, but probably don't flat out hate one another. It's likely that the reason for their distance is a common sense one — would you want to hang out with your very recent ex-boyfriend's new fiancée? Yeah, didn't think so.

Interestingly, if you take a look back at the season, you'll notice that Raven and Vanessa were two of the women who interacted with one another the least. And it's not like either of the two were loners in the house. Between post-filming social media activity, that amazing Women Tell All blooper reel, and scenes of the women bonding that actually aired on the show, it's very clear that plenty of Nick's ladies made lasting connections (with one another, if not with him) while appearing on The Bachelor.

Raven and Vanessa, on the other hand, don't appear to have become friends outside of the show. In fact, in retrospect, it doesn't even seem like they made an effort to be particularly friendly with one another while on the show. It's possible that, because of which group dates they were on, Vanessa and Raven just legitimately didn't have a ton of time to bond with one another. They weren't frequently paired together during smaller group excursions, and both had a high number of one-on-one dates this season.

Also, and this is just an offhand observation — was it just me, or did Raven look legitimately pretty upset to see Nick choose Vanessa over Rachel in the final three rose ceremony? She gave Rachel a big hug, whereas Vanessa just stood off awkwardly to the side. Seriously, just take a look:

It's perfectly understandable that Vanessa and Raven might not be friends. After all, they've spent the most time out of any of the contestants competing for the same man, becoming emotionally invested in their relationship with him. It makes sense that a sense of rivalry would have developed, making it hard to form any kind of friendship after the fact.

Thinking back in Bachelor Nation history, while there are plenty of friendships to have sprung up among the show's alums, I can't think of any final two pairs who ended up being particularly good friends after the show. At best, they're cordial. At worst, they're Nick and Josh Murray.