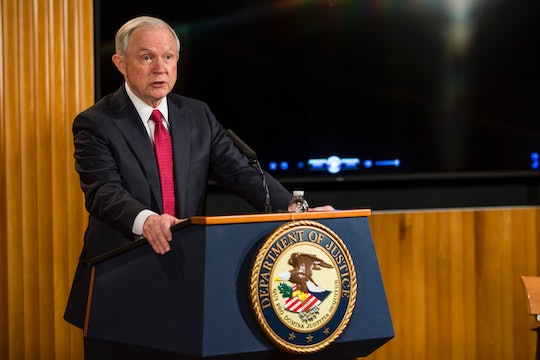 Responding to yet another wave of outrage related to alleged contacts between members of the Trump administration and representatives of a Russian government accused of actively working to influence the U.S. presidential election, Attorney General Jeff Sessions has removed himself from working on any probes into the matter. That Sessions recused himself is a huge deal because he himself is accused of having lied under oath during his confirmation hearing about his own previous conversations with the Russian ambassador, though Sessions has claimed to have misunderstood the line of questioning itself. To understand the full implications of the latest development, it's important to understand what "recuse" really means and the circumstances that led to Sessions taking the serious step.

So here's the Merriam-Webster definition: "to disqualify (oneself) as judge in a particular case" and "to remove (oneself) from participation to avoid a conflict of interest." Essentially, Sessions won't step down as the nation's law enforcement officer, but he will cede control of Russia investigations.

On Wednesday night, The Washington Post first reported that Sessions, who was then a Republican senator from Alabama and a Trump campaign surrogate, had met with Russian ambassador Sergey I. Kislyak in July and September. But when Minnesota Sen. Al Franken ask him during his January attorney general confirmation hearing what he would do if he found out any Trump campaign officials had communicated with the Russians, Sessions dismissed the then-hypothetical situation. "I'm not aware of any of those activities," he said, according to CNN. "I have been called a surrogate at a time or two in that campaign and I did not have communications with the Russians."

The White House has not yet responded to Romper's request for comment.

So, the Post report inspired a wave of bipartisan disenchantment. Although representatives on both sides of the aisle soon began demanding that he step away from any investigations related to alleged Russian interference in the election, Sessions insisted in a statement Wednesday night that he "never met with Russian officials to discuss issues of the campaign." In qualifying his statement to specify that he never met with Russian officials to talk about the campaign, Sessions did not all-out deny ever having met with Kislyak — one of those times allegedly in the then-senator's office.

It's an unsettling prospect for many Americans and members of Congress, as those in the highest echelons of Russian government are suspected of participating in cyberattacks and misinformation campaigns to sway the election in now-President Donald Trump's favor. As the government looks into the full scope of Russia's influence, having an attorney general who may be personally embroiled in the controversy, even tangentially, seems like a bad idea.

At the press conference during which he announced he'd recuse himself Thursday, Sessions said that he "should not be involved in investigating a campaign I had a role in," NBC News reported.

He also admitted to having met with Kislyak. "In retrospect, I should have slowed down and said, 'But I did meet with one Russian official a couple times, that would be the ambassador,'" he said.

Before that, even top Republicans like House Oversight and Government Reform Committee Chairman Rep. Jason Chaffetz were imploring Sessions to recuse himself from any Russia probes even before the attorney general announced at the press conference that he would do so. So, lots of Americans woke up Thursday morning woke up wondering what exactly the word meant amid the fervor that dominated their timelines after the Sessions news broke: According to Merriam-Webster, searches on its site for "recuse" spiked the morning after the Post published its story, and Vox reported that searches for it on Google Trends increased by 100 percent.

So far, Sessions has agreed to forfeit his role in Russia investigations; he's not yet gone the way of former colleague Michael Flynn, who resigned from his position as national security adviser last month, when it was revealed that he had lied about having talked with Kislyak, too. Even when it's confusing and chaotic, the Russia situation is becoming disturbingly predictable

More Like This
The Personal Training App That Made Me Love Working Out Again
Meghan Trainor Shares Baby News After Dropping Hints On TikTok
Michigan Right-Wing Group Wants To Erase LGBTQ+ Sex Ed
13 Is "Too Early" For Kids To Be On Social Media, Surgeon General Cautions
What Parents Are Talking About — Delivered Straight To Your Inbox