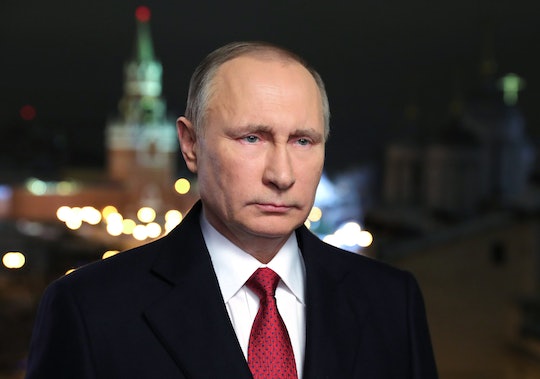 Russian Hacking Report: What You Should Know

Ever since U.S. intelligence agencies across the board united, post-election, in the assessment that the Russian government engaged in a coordinated effort to influence public opinion in favor of Donald Trump, the president-elect has vehemently denied the veracity of these claims. Now, the agencies have published the declassified version of their findings — and what's in the Russian hacking intelligence report is just as significant as what's not contained there. That's because, after Trump received his briefing on these troubling conclusions Friday, he released an official statement insisting that the barrage of Kremlin-orchestrated cyber attacks and fake news articles "had absolutely no effect on the outcome of the election." The Office of the Director of National Intelligence said no such thing, though — but it did detail how Russia sought to interfere with the very integrity of the United States' democracy.

According to the report, the FBI, CIA, and the National Security Agency agree that Russian President Vladimir Putin personally ordered the hacking operations that arguably played a role in costing Democratic presidential candidate Hillary Clinton the election. And in releasing the resulting evidence that the supposedly neutral Democratic National Committee had favored Clinton over primary opponent Bernie Sanders and that she had delivered paid speeches to Wall Street bankers, the Russian government worked toward its "consistent goals," according to the report, "to undermine public faith in the U.S. democratic process, denigrate Secretary Clinton, and harm her electability and potential presidency."

That Putin reviles Clinton and sought to elevate Trump's reputation among the American electorate has, of course, been previously reported, but the new report offers additional insights into the leader's thinking and methods. For example, he originally set out to "undermine the U.S.-led liberal democratic order" in part because he reportedly blames the United States for the 2016 release of the Panama Papers — which made public the $2 billion he held in a personal account, according to Vox. He also faults Clinton's skepticism about the fairness of elections in Russia for anti-government protests in his country in 2011 and 2012. But the mission to denigrate Clinton soon morphed into a campaign to boost Trump, at least partly because Putin's positive experiences working alongside other businessmen-turned-world leaders led him to view the real estate mogul as a potential ally.

To do this, the Kremlin did engage in the hacking enterprises (as well as relaying that information to the publishing platform WikiLeaks), but the report also focuses on the English-language Russian propaganda news outlet, RT America. Based within the United States, RT "has substantially expanded its repertoire of programming that highlights criticism of alleged U.S. shortcomings in democracy and civil liberties," the report states, according to USA Today.

But it appears that even the primary actors in this influence campaign were not at all convinced that it would work. In fact, pro-Kremlin bloggers had prepared a virtual effort to attempt to delegitimize a President Clinton, starting with the planned use of the hashtag #DemocracyRIP. But their guy did get elected — and Donald Trump is still adamant in his insistence that the multifaceted foreign effort to make this happen did not hold any sway over Americans' hearts and minds as they cast their ballots. "Intelligence stated very strongly there was absolutely no evidence that hacking affected the election results," he tweeted in the first of a series of reactions to his briefing. "Voting machines not touched!"

It's true that the intelligence agencies had never said that the Russians altered actual ballots cast by infiltrating voting machines, but for the president-elect to say that they agree that the Russian interference did not affect the outcome — which he also did in an official statement — is an outright lie at worst and a serious misunderstanding of what's in the report at best. According to The Los Angeles Times, the agencies did not offer an evaluation on the extent to which the Russian hacking and dissemination of fake news did or did not cause Americans to vote for Trump over Clinton or vice versa.

"Certainly the intelligence community can't gauge the impact it had on the choices the electorate made,” Director of National Intelligence James Clapper said at the Senate Armed Services hearing Thursday, the newspaper reported.

What we do know — and with "high confidence," in the view of both the FBI and the CIA — is the the Russian plot to sway the election in Trump's favor originated in the highest echelons of its government, and that it was executed in such a way that leads these agencies to believe the Kremlin is emboldened to strike again. Whether or not the incoming president of the United States will admit it, Russia was a major player in how politics played out in 2016.