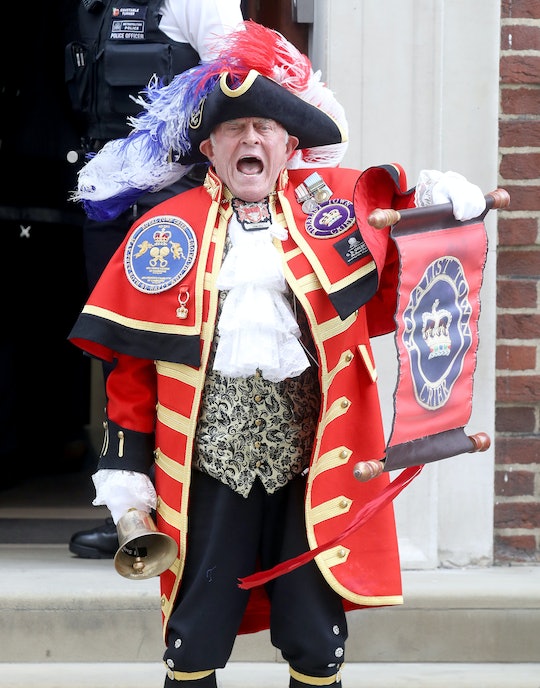 The Third Royal Baby Was Born On St. George's Day Mean & Here's What That Means

It's royal baby time. According to a statement from Buckingham Palace, The Duchess of Cambridge, Kate Middleton, safely delivered her baby boy at 11:01 a.m. London time on April 23. Apparently that means that the newest royal baby has a royally special birthday in England — St. George's Day. Those of us of not in the UK probably haven't heard of it, though. So what does St. George's day mean?

As reported by People, St. George's Day is a "feast day" or holiday celebrating St. George — the patron saint of England and the official protector of the British royal family. So, it seems fitting that the newest member of the royal family would be born on this day. St. George was also kind of big deal. According to dateandtime.com, he's most well-known for protecting a princess by slaying the dragon that was about to devour her. So, he's pretty much the ideal protector for the new baby prince, who is now fifth in line for the English throne, as reported by Time. While St. George's day is not an official day off from work in England, according to Timeanddate.com, people across the country will display flags with a red cross on a white background in his honor, which is the symbol for the saint and also featured on the British flag.

Unless you live under a rock, you've probably heard that the Duke and Duchess of Cambridge — Kate Middleton and Prince William — welcomed their third child, a baby boy, on April 23. In addition to celebrating their newest baby prince's birthday, British people celebrate another holiday on April 23 — St. George's Day — a national holiday in England. According to timeanddate.com, the holiday honors St. George, a knight who lived in what is now Turkey around 280 A.D.

As People reports, St. George ironically never actually visited England. Rather, he was a Roman solder who achieved sainthood when he maintained his Christian faith even when faced with torture. He was then executed on April 3, 303, at about 23 years old. As a result, his official symbol is a red cross on a white background, according to dateandtime.com.

The mythology around St. George's Day is a bit more like something from Game of Thrones or The Hunger Games than what the history books say. Apparently, St. George rescued the village of Silene from an evil dragon who was preventing them from getting water from the town well. The villagers were required to pick a person by lottery to sacrifice each day to the dragon. One day they picked a princess out of the bucket, and in true hero form, St. George saved the princess and slayed the dragon. The villagers were so happy they converted to Christianity.

According to People, St. George is officially the patron saint of England. Also, probably due to his legendary princess-saving skills, the knight also holds the honor of being the official "protector of the royal family." So, it seems fitting that the newest baby royal would be born on his official holiday.

Timeanddate.com notes that historians largely view the legend of St. George and the dragon as an allegory for the mass conversion of people from pagan religions, represented by the dragon, to Christianity, represented by St. George. This has caused quite a bit of controversy over the holiday on Twitter, by people who view the holiday and it's flag as a symbol of white nationalism, the anti-immigration movement, and Islamaphobia.

As Timeout.com reports, for some British folks St. George's day is celebrated by drinking, feasting, and even jousting in his honor. So, it's kind of like St. Patrick's Day and a Renaissance Festival all rolled into one.

Regardless of the controversy around St. George's Day, though, people all over the world are celebrating a royal birth on April 23. According to the official birth announcement from Kensington Palace, Britain's newest prince was born at 11:01 a.m. London time. Both baby and mom are doing just fine, and that is totally something to celebrate.