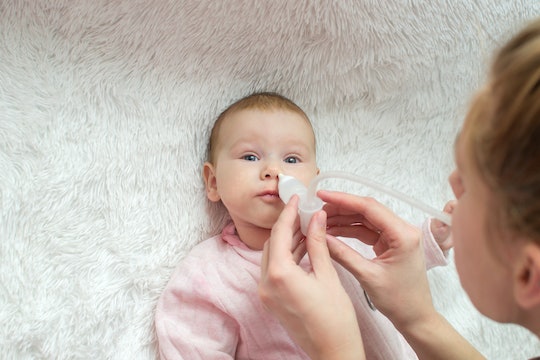 Body fluids and babies seem to go hand-in-hand. I feel like once my baby is born I will be surprised about just how much fluid can come out of that tiny little body — fluid from all kinds of orifices, including my baby’s nose. Why does it seem like babies always have a runny nose and you’re constantly trying to get that crust off of their upper lip? Is all snot created equal? What does the color of your baby’s snot mean? I spoke with pediatricians so my worry wart self can be prepared to know when it’s just sniffles — like allergies — or when I should give the baby’s doctor a call for something more serious.

As far as all the different colors of snot, Dr. Gina Posner, a pediatrician at MemorialCare Orange Coast Medical Center in Fountain Valley, California, tells Romper, “White, yellow, or green mucus just means an increase in polymorphonuclear cells" and it does not necessarily have anything to do with bacteria. “The normal progression of mucus is from clear to white to yellow to green,” she says. Dr. Danelle Fisher, the chair of pediatrics at Providence Saint John’s Health Center in Santa Monica, California, tells Romper green mucus does indicate an infection, but it’s very important to know that the infection may be bacterial or viral. If your baby has green mucus, it may be best to let their pediatrician know in case it is bacterial so it can be treated. Unfortunately, viruses can’t be treated, and it just needs to run its course. However, as far as clear mucus, Fisher says it’s more usually associated with allergies.

On another note, if your baby has a bloody nose, though it’s scary, Baby Center suggests it’s really common in babies and to just place them in your lap and lean them slightly forward while using a soft washcloth to pinch the soft part of their nose shut for 10 minutes.

Why do babies always seem snotty? Fisher says most babies contract “... a cold or upper respiratory infection about once a month, so it seems like they have a perpetual runny nose — but in reality, it is usually one cold after another.” Posner adds, “Some babies always have a runny nose because they have older siblings or are in day care and are constantly getting colds. [Babies] can also have a slight runny nose from teething. It is very tough to prevent them at that age because they usually like touching everything. The best prevention is washing their hands a lot.”

To know the difference between a cold and allergies, other than the color of mucus, Fisher says, “Other symptoms can be helpful.” Look for a fever and a cough together, and fussiness. “Itchiness is more commonly due to allergies,” Fisher explains. Posner adds that most babies don’t show signs of having allergies until they’re at least 6 months old.

To treat your baby’s runny nose, Posner says that unfortunately, there aren’t any really great medications to do so. “I recommend using saline nose drops and suctioning the nose. Also, using a humidifier (cool mist) in the room with them. If they are uncomfortable, a little Tylenol or Ibuprofen (after 6 months for the Ibuprofen).” Fisher recommends using a snot sucker — like the Nose Frida — to gently remove the mucus.

Most of the time, runny noses in babies aren’t super serious, especially if the mucus is clear, white, or yellow. Once it’s green, however, though it may not necessarily mean there’s a bacterial infection, it never hurts to get an opinion from your baby’s pediatrician to be sure.