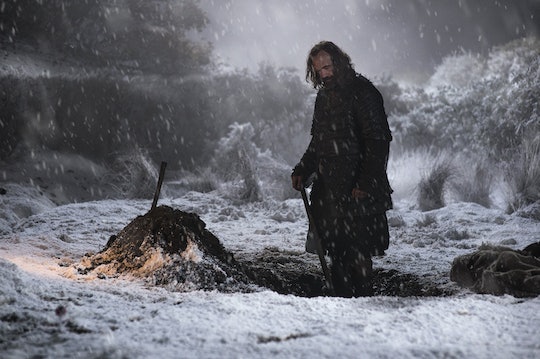 With just two short seasons left until the show is over for good, the Season 7 premiere of Game of Thrones spared no expense, time-wise. They were able to check in with pretty much all of the important characters and stories that fans had been chomping at the bit for, including The Hound, who’s now rolling with Beric Dondarrion and the Brotherhood Without Banners. But after looking into the flames, what does The Hound’s vision mean on Game of Thrones?

First of all, it was kind of rude for Thoros (can we just call him Top Knot from now on?) to force him to look into the flames when we all know that fire is the one thing that scares The Hound, but when he did, he had a clear vision of The Wall and a castle "where The Wall meets the sea." He also described a mountain that resembles an arrowhead with thousands of White Walkers marching past the mountain and for The Wall.

Earlier in the episode, while Jon had the meeting at Winterfell with the heads of all of the Starks’ allies, he assigned Tormund and the other Wildlings to keep watch at Eastwatch-By-The-Sea, the castle closest to Hardhome, and what is likely the same place The Hound saw in his vision on Game of Thrones. Tormund said a cocky "I guess we’re the Night’s Watch now," but because of what The Hound saw, it might mean that this is where The Wildlings meet their end.

I know, Tormund can’t die before he has the chance to have beautiful babies with Brienne, but at the very least, it looks like the first big battle with the White Walkers is going to be there. The White Walkers might first lose some numbers while fighting with the Wildlings, but then again it could also mean that by the time they reach, say, Winterfell, we’ll have a Tormund wight on our hands, which would be both awesome and sad.

While one Redditor posted that while it might be too easy for The Hound to have such a clear vision of what's to come, it would also make sense then for The Hound and the Brotherhood Without Banners to make their way North and not only warn Jon and the others, but possibly fight at their side too.

And Redditor smw89 added that maybe The Hound’s vision on Game of Thrones was so clear because all these years, he was meant to be able to see into the fire, but because he was so afraid of it, he never knew that. They theorize that when he was burned with fire as a child, the Gods marked him, enabling him to see visions.

This would mean that everything The Hound saw regarding what’s clearly Eastwatch-By-The-Sea is going to come true sooner rather than later. Of course, with Arya headed south, we’ll have to wait even longer for an Arya/Hound reunion, but if he goes to the North and meets up with Sansa and Jon, he can at least tell them that their sister is alive, giving the remaining Starks a glimmer of hope.

Basically, The Hound’s vision on Game of Thrones is likely what will start to bring together more soldiers for what is bound to be the greatest battle of the series against the White Walkers.