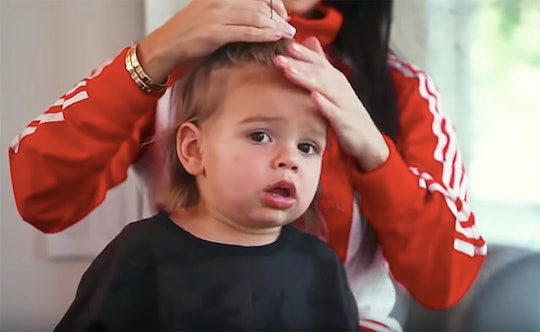 Reign Disick, Kourtney and Scott Disick's youngest kiddo, is one spirited 4-year-old. From his hilarious appearance on The Ellen DeGeneres Show earlier this May, to his cool guy style, the miniature reality star is already a big hit with fans. And now some people are perhaps curious about what the name "Reign" means, a moniker that just so happens to fit perfectly with his bold personality.

Although Reign isn't a big fixture on Keeping Up With the Kardashians, his lovable and wild personality always manages to sneak its way in when you'd least expect it. A particular memory that comes to mind? Look no further than Reign's cameo on The Ellen DeGeneres Show, in which he screamed for candy and complained about the length of the conversation. The appearance definitely showed off his dynamic side, to say the least.

Going off of that sentiment, the name Reign compliments his personality perfectly. The moniker, according to Baby Name Wizard, can mean to "to reign," "kingdom," or "king."

I don't know about you guys, but these meanings seem to reflect Reign's essence. The little guy appears to embody the spirit of a leader, never being afraid to speak his mind or buck against style norms. There's just something that makes Reign stand out from the crowd, whether it's his long hair or high level of energy.

What's especially interesting about the kiddo's name? Kardashian always knew he was meant to be a Reign.

Phew, I'm glad that Kardashian eventually settled on Reign. Although Preston is a fine name, it's difficult to imagine the boy having a different name other than Reign.

But wait — that's not all. Kardashian considered using the name for both Mason and Penelope, revealing, according to Life & Style mag: “I actually had the name on our list with Mason. Then with Penelope, I had it on the list but spelled R-A-I-N... Once I found out I was having a boy, we just changed the spelling again."

As for Reign's middle name, Aston, the moniker ties the entire name together. You might have already noticed, but the initials of Reign Aston Disick translates to "R.A.D" aka rad. A rad kid deserves a rad name, right?

Fans seem to agree with my take on Reign's name — in fact, many people took to Twitter after he was born to obsess over the moniker.

Someone else said: "The new Kardashian baby's name is Reign Aston Disick. How f—king cute."

One person commented: "Kourtney Kardashian's new baby is named Reign Aston Disick and I think we all know Scott picked that name."

"Kourtney and Scott named their newest baby," a user wrote. "Reign Aston Disick and I'm currently obsessing over his name."

Yep, it's clear Kardashian and Disick made the right decision when they decided to on a regal name for their little King, aka Reign.