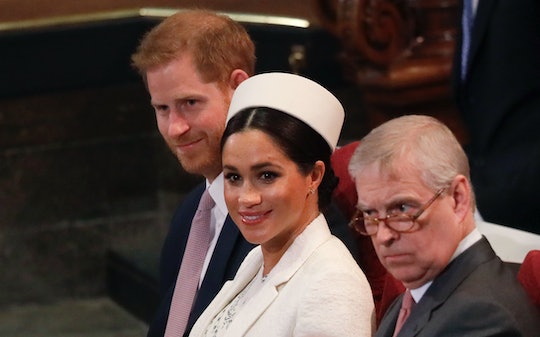 Does The World Need The Palace Response To 'Meghan & Harry: A Royal Baby Story'?

If you have royal baby fever, then TLC's Meghan & Harry: A Royal Baby Story might be just what you need to calm your nerves before Meghan Markle and Prince Harry give birth to their baby later this year. While Kensington Palace doesn't make a habit of responding to the reports on the royal family, they did speak up in regards to the Channel 5 documentary, Kate Vs. Meghan: Princesses At War, to debunk a series of sensationalized rumors. So what does the Palace say about Meghan & Harry: A Royal Baby Story?

Although it would be interesting to hear how the royal family feels about the TLC documentary, the Palace hasn't responded to Meghan & Harry: A Royal Baby Story. However that may be in part due to the neutral nature that the previews of the film seem to give off. While Kate Vs. Meghan pit the Duchess of Sussex and the Duchess of Cambridge against each other, the new one-hour special simply hopes to answer questions about the royal baby following the Kengsinton Palace baby announcement in Oct. 2018.

In a press release, the President and General Manager of TLC, Howard Lee, explained why the network chose to make the special. In the statement, Lee said:

As the home of all things wedding, all things royal and all things family for viewers in the U.S., it makes perfect sense for TLC to follow this next generation of royals as they journey into the joys of parenthood. We’re excited to bring this special to our passionate fans.

According to the release, Meghan & Harry: A Royal Baby Story interviewed a number of sources to answer a few burning questions such as "how will Princess Diana’s legacy impact Harry and Meghan’s parenting style? Is Meghan really going to have a hypno-birth delivery? Will Meghan continue the tradition of posing for a photo post-birth like others before her? Will Meghan seek out advice on how to raise a royal from sister-in-law and rumored rival Kate? Will Meghan’s father ever get to meet his grandchild after being so removed from his daughter’s new life?"

That being said, fans of Meghan and Harry may recall a few shady comments Meghan's half-sister has made in the past. And now, it's possible that the special may not be entirely positive, as Samantha may rehash a bit of family drama in the TLC documentary.

"You can't hurt people like this and then turn around and flip the script and play victim," Samantha said in the preview.

While this could simply come down to clever editing on TLC's part and viewers won't know exactly what she is referencing to until the special airs.

As of now, Kensington Palace hasn't commented on Meghan & Harry: A Royal Baby Story. However, the TLC special has yet to air and the Palace is known for choosing their battles when it comes to the press.