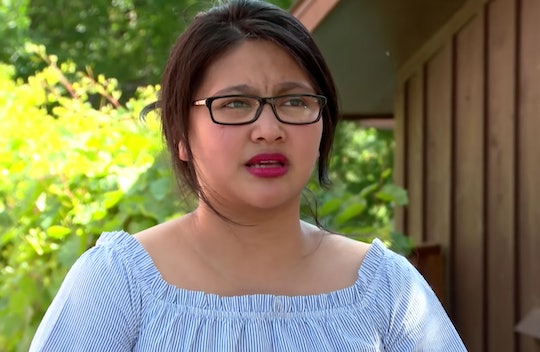 Here's What The ‘90 Day Fiance’ Cast Thinks Of Leida

Every couple has faced drama on this season of 90 Day Fiancé — but Eric and Leida may just have faced the most drama. And over the past few months, since the show finished filming, the couple has continued to cause drama off-screen. Now that the finale has aired, fans may be wondering: what does the rest of the 90 Day Fiancé cast think of Leida?

As of late, Leida has been on the receiving end of some hate on the internet. But based on her Instagram page, she and some of the other 90 Day Fiancé cast members have hit it off. In November, Leida posted a photo of herself posing with Fernanda and Ashley, two other women who had 90-day engagements on this season of the show. "Miss you all my beautiful ladies," Leida captioned the shot, adding a heart emoji. Olga, who also documented her engagement on the reality show, even liked the post. That one post isn't the hugest clue, but if Leida's caption is really true, then perhaps the gals are friends.

Steven, who was engaged to Olga on this season of the show, seems to be a critic of Leida. For one thing, Leida recently posted on Instagram promoting a vegan teeth-whitening treatment. Steven commented on her profile: "Why are you promoting vegan teeth whitening kits when you are not even vegan yourself. Like really lol," as seen in a screenshot shared by a fan on Instagram. Leida replied to Steven that the company asked her to promote their products, and that plenty of other people who aren't vegan promote vegan products.

Unfortunately, Leida has a lot of haters out there in addition to Steven. In a video on social media in December, Leida acknowledged the criticism she has received since 90 Day Fiancé began to air. "How can people wishing me die?" Leida cried in the video, as per the Daily Mail. "This is not fair. I'm a human, too … I didn't sign up for this. We didn't know they're going to portray us that bad ... This is not worth it at all. We are never going to do this again." This video made headlines, with outlets calling it Leida and Eric's official announcement that they were quitting 90 Day Fiancé.

So, why did Leida allegedly get death threats? Many fans seemed to be critical of the way she treated Eric's 19-year-old daughter, Tasha. Over the course of the season, Leida continually butted heads with Tasha, who lived with Eric. After several attempts, Leida finally managed to successfully kick Tasha out of the apartment — with Eric's help. "I want you to move out. I don't think that we can work it out," Leida told Tasha on the show.

A lot of viewers thought Leida was too harsh on Tasha — but that is no justification for the death threats Leida claimed to have received.

Now, months after their wedding, Eric and Leida continually make their love for each other clear on social media. It's obvious that Eric is a fan of his wife, but it will certainly be interesting to see what else Steven and the cast say about Leida on the tell all.