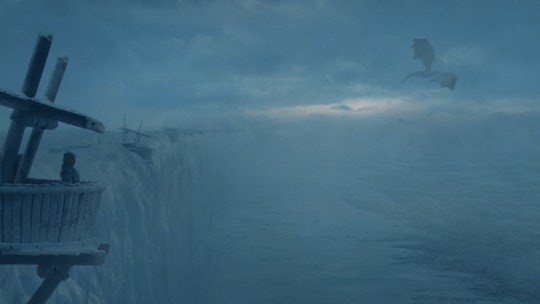 The 'Game Of Thrones' Season 7 Finale Delivered An Epic Cliffhanger

Ever since Game of Thrones first debuted back in 2011, fans knew it was only a matter of time until that icy barricade that has separated the White Walkers from the humans was going to come down. And now, thanks to Viserion, it finally has. But what does the Wall coming down mean on Game of Thrones? Let's just say that Westeros is is some serious trouble heading into Season 8.

The whole point of the Wall was to keep the undead army out in the cold (literally) until the end of time. The Wall was even said to be built with magic as a means of making sure they could never find their way over or through it. But the builders of the Wall probably didn't factor in the possibility that the Night King and his army would have a dragon wight on their side eventually. And I think Viserion's help was just what they needed to finally bring that big barrier down once and for all.

Obviously, in true Game of Thrones fashion, viewers were left with this enormous cliffhanger and absolutely no idea what's going to happen next. All fans know now is that the enemy is at the gate. It blew open the door. And it's coming for you.

The first thing that comes to mind, though, is that Winterfell has never been in greater danger — which is saying something, considering Ramsay Bolton used to take up residence there not too long ago. Winterfell isn't all that far away from the Wall, meaning it will most likely be the Night King's first stop during what's sure to be their long tour of killing people. That means Sansa and Arya need to get as far away from there as they possibly can.

I'm hoping that, since they have Bran with them, that he'll be made aware of what's happened thanks to his mysterious connection to the Night King and give everyone plenty of time to head out before the army of the dead get there. That is, if Bran could step away from that tree long enough to report any useful information.

Another aspect of this that interests me is what will happen when the White Walkers get to a location that isn't covered in snow. Winter may have come, but King's Landing still appears to be relatively warm. So will we actually see White Walkers exist outside of an icy environment? Again, this could be where Viserion comes into play.

Depending upon how vast Viserion's new powers are, he could potentially use those blue flames of his to forge an icy trail for the White Walkers and wights to march on. Maybe he has the ability to cover all of King's Landing in snow. And if that's the case, then hell is quite literally about to freeze over Westeros and you better believe not all of our beloved characters will make it out of this thing alive.