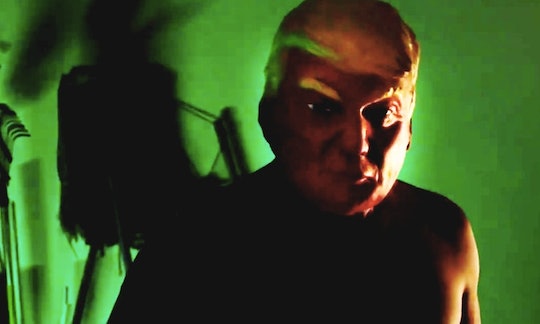 Trump May Have Some Thoughts On 'AHS: Cult'

When fans first heard that part of Season 7 of American Horror Story would include coverage of the 2016 presidential election, they either decided to check out completely because of the politics, or got more into it than before. Either way, the election results might be what drives a lot of the characters this season, but the show hasn’t turned into a political drama. But that doesn't mean our current President won't have some thoughts on the matter. So what does Trump think about AHS: Cult? The beginning of his presidency plays a role at the beginning of the season, as well as the impact it has on both Trump supporters and those who had campaigned for Clinton. And since Trump’s never been shy about sharing his feelings on social media, how could you not expect to hear from him about AHS: Cult?

So far, he’s been silent about the upcoming season of AHS, but in the past, he’s been unafraid to not only call people out for speaking of him negatively, but also hand out his own insults on a regular basis. Just incase the POTUS does decide to take a crack at creator Ryan Murphy and AHS: Cult, though, Murphy has made it clear that there will be no impersonations of either Trump or Clinton on the show this season. "The themes of American Horror Story have always been allegories," Murphy said at the Publicists Guild Awards Luncheon in Beverly Hills in February 2017. "You will not see Trump and Clinton as characters on the show."

In the past, Trump has been quick to call out negative pop culture references to himself and once AHS: Cult premieres on FX, he might use the opportunity to strike again. Really though, his commentary on pop culture isn’t just limited to things people say about him. In the past few years, Trump has tweeted about almost anything, from Kristen Stewart and Robert Pattinson’s relationship to the paparazzi taking photos of Kate Middleton sunbathing, and then, of course, criticisms of Megyn Kelly covering him on her show.

AHS: Cult is not strictly about the presidential election, but it does use the election results as a jumping off point for Sarah Paulson’s character Ally Mayfair-Richards and her coulrophobia, or fear of clowns, which comes back in full force because of her stress over the Trump winning the election.

Naturally, fans are going to wonder what Trump thinks about AHS: Cult, and while he hasn’t said anything yet, there’s still a good chance that once the season begins, he’s going to be vocal about it on social media at the very least.