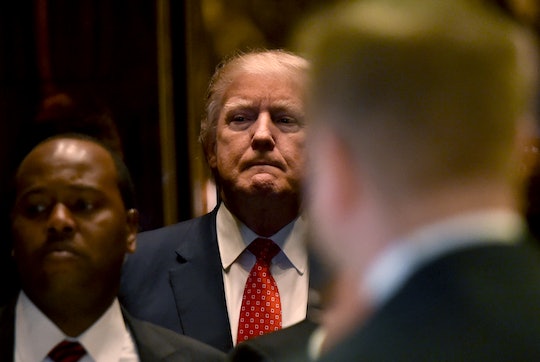 President-elect Donald Trump continues to hold meetings at Trump Tower in New York, even as the Jan. 20 inauguration draws near. Most recently, he met with Robert Kennedy Jr., a vaccine skeptic who espouses the discredited theory that vaccinces cause autism. Naturally, this has many wondering what Trump thinks of vaccines... and what he plans to do about them when he enters the Oval Office.

Kennedy told reporters outside Trump Tower on Tuesday that the president-elect had contacted him to chair a new commission concerning vaccine safety and scientific integrity.

Romper reached out to the Trump transition team for comment regarding the alleged commission, but did not receive an immediate response.

Kennedy is a longtime vaccine skeptic who has suggested that thimerosal, a preservative found in vaccines, has been linked to autism in children. Despite the fact that scientists have widely discredited this theory for decades, Trump has chosen to give the theory credence by asking a noted vaccine skeptic to look into the scientific integrity of vaccines. Kennedy told reporters on Tuesday:

Kennedy went on to assert that both he and President-elect Trump were "very pro-vaccine", but that certainly doesn't appear to be the case. In 2015, Kennedy (who is the son of former Attorney General Robert Kennedy and the nephew of former President John F. Kennedy) wrote an "expose" in 2005 for Salon and Rolling Stone that contended scientists have been hiding a link between autism and vaccines for years; the expose was later deleted by both publications.

As for President-elect Trump, he spoke out against vaccinations during a Republican presidential debate in 2015. He said he had seen the so-called effects of vaccinations at work:

You take this little beautiful baby, and you pump . . .We had so many instances, people that work for me, just the other day, 2 years old, a beautiful child, went to have the vaccine and came back and a week later got a tremendous fever, got very, very sick, now is autistic.

Trump went on to clarify in 2015 that he does believe in vaccinations, simply in "smaller doses over a longer period of time."

The Center for Disease Control and Prevention found that there is no link between ASD (Autism spectrum disorder) and vaccines. Dr. William Schaffner, who advises the federal panel on U.S. vaccine policy as an infectious disease expert from Vanderbilt School if Medicine, had this to say about a potential appointment in Trump's Cabinet of an outspoken vaccine skeptic:

The concerns of public health officials and pediatricians and family doctors regarding the Trump administration and its attitude toward vaccines have just been reinforced.