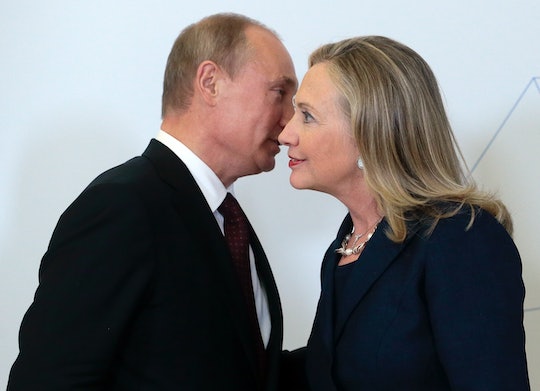 What Does Vladimir Putin Think Of Hillary Clinton? He's Not Exactly Her Biggest Fan

On Wednesday, the GOP presidential nominee, Donald Trump, called on Russia to hack Hillary Clinton's email at a press conference on the campaign trail in Florida. Earlier this month, WikiLeaks released hacked emails from the Democratic National Committee that revealed a coordinated effort favoring Clinton as the Democratic nominee over her rival, Vermont Sen. Bernie Sanders. Clinton — and security experts — allege that the leaked DNC emails were illegally obtained by Russian hackers. With the sudden focus on Russia's supposed influence on the U.S. election, what does Vladimir Putin think of Hillary Clinton? While they once shared a diplomatic relationship, Putin and Clinton are hardly BFFs.

Putin was — and still is — President of the Russian Federation while Clinton served as Secretary of State. In 2011, Putin ran for a third term as president, but didn't expect such widespread backlash against him. He squarely put the blame on Clinton when Putin nearly lost the 2011 Russian election. While Putin never provided any concrete evidence other than Clinton's remarks supporting the Russian opposition at the time, it certainly wasn't Putin's first public disapproval of Clinton, either. Putin's disdain for Clinton goes all the way back to her tenure as a U.S. Senator.

"A head of state should have a head."

While on a campaign stop in January 2008, then New York Sen. Hillary Clinton said Putin "has no soul" on the eve of the New Hampshire primary election. This is probably where Putin's beef with Clinton started. When asked about Clinton's comments a few weeks later, Putin responded with, "At a minimum, a head of state should have a head."

Putin Believes She Was A Russian Opposition Agent Provocateur

When Clinton was the U.S. Secretary of State, she expressed that she and the U.S. State Department had "serious concerns" about Russian elections after Putin just barely won re-election. Almost immediately, Putin accused Clinton of inciting Russian protests, saying at the time, "She set the tone for some actors in our country and gave them a signal. They heard the signal and with the support of the U.S. State Department began active work.

That Time He Called Her A Weak Woman

In a 2014 interview just before the Summer Olympics in Sochi, Russia that year, Putin had no love for Clinton when asked about her tenure as U.S. Secretary of State, according to ABC News:

It’s better not to argue with women, but Ms. Clinton has never been too graceful in her statements. Still, we always met afterwards and had cordial conversations at various international events. I think even in this case we could reach an agreement. When people push boundaries too far, it’s not because they are strong but because they are weak. But maybe weakness is not the worst quality for a woman.

Tell Us How You Really Feel, Vladimir

Speaking to Russian military leaders in June, Putin said of Clinton's potential White House victory come November: "If it’s Hillary Clinton, it’s war." And with Clinton's accusations that the DNC email link likely originated in Russia, this is more than just a personality clash between Putin and Clinton. It remains to be seen if Putin has any of Clinton's emails to share — as per Trump's espionage request Wednesday — but given his animosity towards Clinton, it wouldn't be surprising at all if he did release anything he had on her.