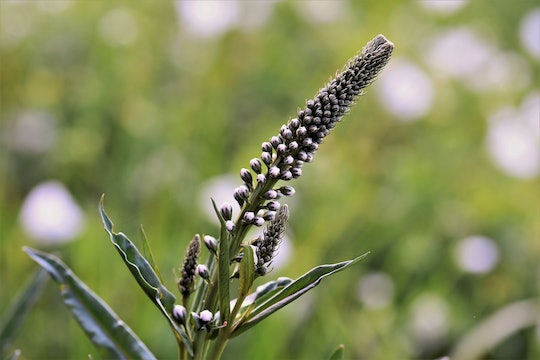 Everything You Need To Know About Black Cohosh, The Herb Some Say Can Induce Labor

For many folks, alternative, holistic, or “natural” medicine is an option that is very lucrative for them — especially with rising healthcare costs and the fear of losing our insurance policies because of a certain administration. Plus, these natural remedies have been used for thousands of years, right? Understandably, many pregnant women who are more than ready to evict their baby turn to researching “natural remedies” to induce labor, and many come across “black cohosh.” What exactly is black cohosh, and what's it used for other than potentially jump starting labor?

According to the National Institutes of Health (NIH), black cohosh is “a member of the buttercup family, is a perennial plant native to North America … and it has a long history of use,” dating back to the Native Americans. Kristen Burris, L.Ac, a women’s health acupuncturist and infertility specialist, tells Romper that in traditional Chinese medicine, black cohosh referred to as Sheng Ma, and “is a critical herb in many herbal prescriptions used for conditions varying from menopausal hot flashes to fatigue to early stages of getting a sore throat or flu. This herb, combined with other herbs, was traditionally used often for headaches that accompanied wind heat headaches or headaches we associate with getting the early stages of the cold or flu with a fever." Black Cohosh or Sheng Ma has been used for thousands of years, according to Burris, and “when inducing labor, we want energy to go downward, not up. When used appropriately, by a trained herbalist, it could potentially help a laboring woman who is suffering from excessive heat, fever, shortness of breath, and a prolapsed uterus."

How exactly does black cohosh work in your body? Burris says, “It can soothe toxic heat in the upper regions of the body, including swollen gums, canker sores, bleeding gums, and a sore throat at the beginning stages of an upper respiratory infection.” She adds that black cohosh “can be helpful in central prolapse of qi, or rather a uterine or anus prolapse," too. A qi, also spelled chi, is a term in Chinese medicine that means “the vital life force that flows through the body and is supposedly regulated by acupuncture,” according to dictionary.com. “[Black cohosh] also aids with Dai Mai channel spasms, or what we may be familiar with as labor pains, and ironically it has an uplifting energy that guides other herbs to the upper regions of the body; hence its benefit in treating upper respiratory problems, sore throat, canker sores, and the like,” Burris says.

You can get black cohosh and several different forms, including liquid extracts, dried extracts in pill form, and powdered, according to NIH. However, it’s really important to not start any herbal supplements, pregnant or not, until you clear it with your doctor and/or discuss them with a certified herbalist because every individual body is different and “using one herb alone is almost never safe in traditional Chinese medicine; it isn’t balanced and does not take the entire patient’s health history and current medical condition in consideration,” Burris warns.

Black cohosh can do some pretty cool things for you if you’re going through menopause or even if you’re in the beginning stages of an upper respiratory infection. However, it’s really important you talk to a certified herbalist and your doctor to ensure you’re doing the right dosage amount and you’re taking it the right way, possibly even with another herb.