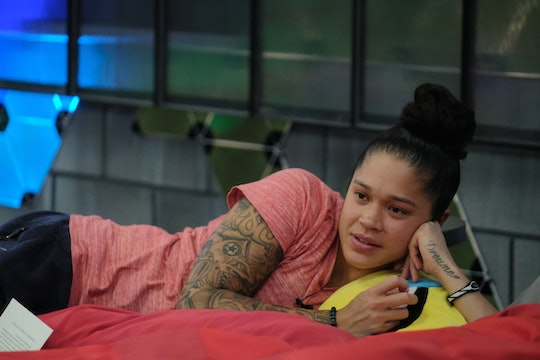 Kaycee Clark has been playing the Big Brother game that almost every houseguest dreams of playing as they go into the house. She was relatively quiet and low-key for the first half of the season and suddenly, she became the winner of three veto competitions in a row and she’s also the current Head of Household. It’s no wonder that she’s so competitive since she’s also a real life professional football player. And by now, fans are probably asking, what football team does Kaycee play for? The Big Brother star has been part of the San Diego Surge since 2011 and was even actively playing for the team when she went into the Big Brother house.

According to the San Diego Surge website, the team was actually founded in 2011, so Kaycee has been part of it since the beginning. And she’s gotten some recognition for her role as the Surge’s wide receiver. Outsports reported that in the 2017 season alone, Kaycee scored five touchdowns for her team. And there are also some highlight reels online showcasing Kaycee’s handiwork out on the field. So it’s no real surprise that she’s starting to outshine even the most intense physical competitors on Big Brother. The only difference is, she waited until now to show her true colors. And because of that, I think she could make it all the way to the end.

Typically, athletes do well on Big Brother, at least where physical competitions are concerned. But I think Kaycee has also played a smart social game leading up to this point. She's been an integral part of Level 6, but has still managed to curry favor with those outside of her alliance. But if she'd shown her physical skills early on in the game, she might not have made it this far. Often, a physical competition beast can become a target of the other houseguests who are trying to eliminate strong competitors early. This could have easily happened to Kaycee this season since she's a professional athlete, but up until this point, she's allowed other houseguests to do the brunt of the work.

Whether she meant to or not, Kaycee sat back and allowed Tyler to become known for winning physical comps while she quietly flew under the radar. She may have been put on the block a few times throughout the season so far, but Kaycee hasn't yet been a major target. And I think that's partly due to the fact that, despite being a professional athlete, she kept her real athletic skills quiet until now.

Eventually, her skills came out when she won three veto competitions in a row, followed by a head of household competition to top it all off. But even now, it doesn't seem like she's a target for most of the other Big Brother houseguests.

Before the season officially began, Kaycee said in her Big Brother bio that her strategy was to lay low and not be a threat at the beginning of the season. "I'm also looking to align with some people where I feel the vibes are right and legit," she said in her bio. I’d say that she succeeded on nailing both parts of her strategy, which is hard to do, since you never really know how you’re going to play the game until you’re in the thick of it.

That being said, does Kaycee now have what it takes to win? Her physical and social games are both on point. She just needs to continue to evade her fellow alliance members and she just might be able to win this thing at the end of the season.