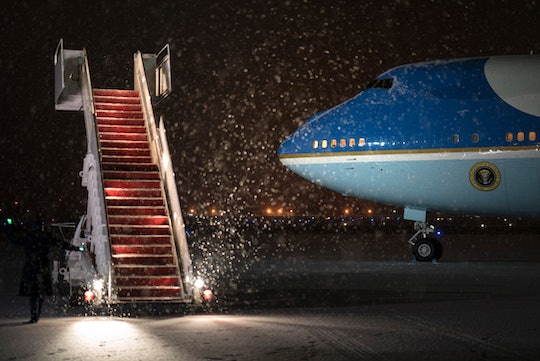 What Happened At Joint Base Andrews? A Reported Bomb Threat Turned Out To Be False

Turns out that nervous D.C. residents did have reason to worry this week. After an unsettling Thursday evening wondering what happened at Joint Base Andrews in Maryland, neighbors were relieved when it was confirmed that a woman who claimed to have a bomb was taken into custody. The incident was reported at about 5:15 p.m. ET at the Visitor Control Center on the base, and authorities have announced that she was not in possession of an explosive device.

Although the situation seems to have been resolved, officials instructed all personnel and residents to avoid the area until further notice. The lockdown ended up lasting for less than an hour with no injuries reported. The woman in custody has not yet been named, and it's not yet clear whether she will face charges. While flights were not redirected, Air Force Security is investigating the incident.

The base, located in Prince George's County just outside of Washington, D.C., was formerly known as Andrews Air Force Base. President Obama and his family, as well as other administration officials, fly in and out of the base regularly.

Another fake bomb threat was reported in Maryland late last month, when a man dressed in a hedgehog costume walked into a Baltimore TV station claiming to have a bomb strapped to his chest. The contraption turned out to be aluminum-wrapped candy bars bound with wires. Police shot the uncooperative suspect before arresting him.

Although both threats turned out to be just that rather than a catastrophe, it's encouraging to see our law enforcement officials reacting quickly and keeping the public updated and informed. I'd much rather read about the free air show hosted at Joint Base Andrews than a tragedy.