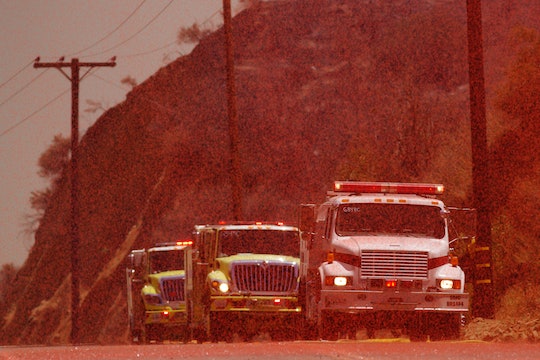 It was a tragic end to a party in the San Francisco Bay area on Friday night. Around 11:30 on Friday night, a fire ripped through a warehouse during a concert, killing at least nine people while as many as 25 more people remain missing. Fire officials continue to investigate what happened at the warehouse in Oakland, California.

According to Oakland Fire Chief Teresa Deloche-Reed, approximately 50 people were at the warehouse on Friday night for a live music event that featured Golden Donna's 100 percent Silk West Coast tour when the fire broke out. The warehouse is home to various artists and their studios as an artist collective. One of the artists who lives in the warehouse, photographer Bob Mule, was in the building when the fire broke out and shared his experience with The East Bay Times:

"It was too hot, too much smoke, I had to get out of there. I literally felt my skin peeling and my lungs being suffocated by smoke. I couldn't get the fire extinguisher to work."

Mule was able to escape the fire with minor burns. Not everyone in the building was quite so lucky. Oakland Fire Chief Reed told CNN:

A majority of the fatalities were found up on the second floor. It must have been a very fast-moving fire.

The fire continues to blaze so strongly that firefighters have yet to be able to enter the building; crews are instead trying to contain the fire from an adjacent roof top. The roof of the warehouse collapsed, and the stairs to the second floor are reportedly impassable, according to Reed:

One of the issues was that leading up to the second floor there was only one way up and down. It is was my understand that stairwell was kind of makeshift, that they put it together with pallets.

Reed told reporters that the building does not have any sprinklers, further hindering efforts to contain the blaze. While the fatality count remains at nine people, Reed warned reporters that number could change as the search continues.

There is still a lot of rubble that needs to be searched. And as we continue to search the building I pray that fatality count does not go up, but I believe there is a potential for it to.

While the cause of the fire has yet to be officially determined, KPIX 5 reported that it has been declared a crime scene. Oakland police are urging family and friends who might be looking for a loved one to call the Alameda County Sheriff's Coroner's Bureau at 510-382-3000.