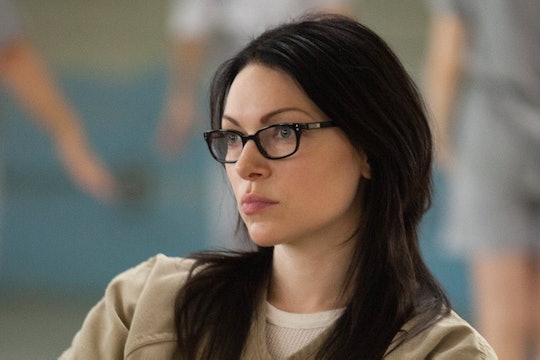 What Happened To Alex On 'Orange Is The New Black'? She's Not In The Season 4 Trailer

Alex didn't play as important of a role last season, especially given Piper's new (and fleeting) romance with Stella (Ruby Rose). True, we were given the anticlimactic story line about Alex's paranoia about being spied on while in prison, but Lolly (Lori Petty) ended up being a harmless weirdo.

That leads us to Alex's last scene in the Season 4 finale of Orange Is the New Black, when all of her paranoid claims about being followed around at Litchfield proved to be kind of true. One of the newer guards ended up being one of the drug kingpin boss's employees, obviously there to kill her off. But that's the last we saw of her, telling the guy, "You don't have to do this" and looking rightfully terrified of the hired killer.

True, Laura Prepon has been absent from the Season 4 trailers thus far, but her Instagram account tells a totally different story. If Alex's return to Orange Is the New Black was supposed to be a surprise or secret, that whole possibility is gone now.

And for those of you who are quick to point out that Prepon sharing this photo on her Instagram just means that we'll get an episode to show her death in Season 4 and that will be the end of it, don't be so quick to count out Alex Vause. She may have been thrown in prison (twice), but she's pretty crafty. There is also the whole matter of Prepon appearing in an official promo photo for Season 4 of Orange Is the New Black, so basically, Alex is coming back and all will be right again at Litchfield. Or, you know, total chaos, being that nothing is every perfect among those crazy ass women and guards.

Since Alex Vause doesn't appear in any of the trailers for Season 4 of Orange Is the New Black, it's anyone's guess just when she pops back up or if we get to wait several episodes before learning about her fate. But if you listen closely in the Season 4 trailer at the 0:55 mark, you can hear someone say, "Can you keep a secret?" as the screen cuts to a scene of Lolly running across the grass to the greenhouse.

My guess is that Alex managed to get herself out of her kill-or-be-killed predicament by doing the former and now has to somehow get rid of the guard's body. That, or Lolly is the one who comes to her rescue, giving Alex at least one friend at Litchfield. Which she really needs, since Piper only ever cares about Piper. And that weird underwear business.