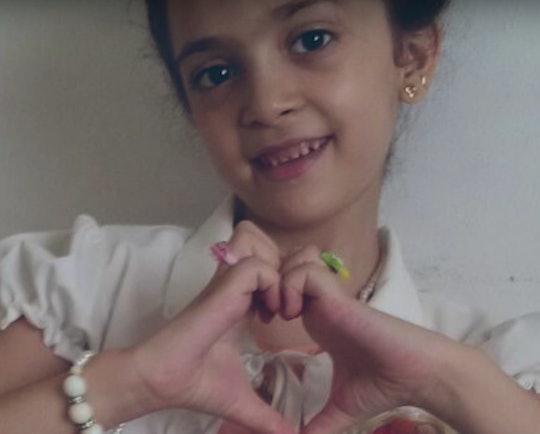 The world met 7-year-old Bana Alabed in late September, when she, along with her mother, began tweeting about the unthinkable horrors of life in the war-ravaged city of Aleppo, Syria, as well as her attempts to sustain a childhood there. Bana's far-away story served as a heartbreaking symbol of the devastation of the civil war there, which has killed hundreds of thousands and displaced millions — and trapped others in the "slaughterhouse," as one United Nations official described it, of Aleppo. And on Sunday, just a week after Bana and her family were forced onto the streets after losing their home to bombing, the Twitter account disappeared, and those helplessly following her plight are desperately trying to figure out what happened to Bana Alabed, and whether there is any chance she could be saved.

Update: The day after Bana's Twitter account disappeared, it was reactivated and her mother posted a harrowing tweet: "Under attack. Nowhere to go, every minute feels like death," she wrote. "Pray for us. Goodbye - Fatemah #Aleppo."

Bana's Twitter account had attracted more than 100,00o followers since she started tweeting about daily struggles unimaginable for most people, especially a child so young: the death of a friend in the fighting, images and videos of the bombs falling around her as she sheltered with her mothers and two younger brothers and the destruction they caused, pleas for her own government to stop its bombardments on its own people. So, many of those also caught the last, panicked send from the account before it went dark, signed by Bana's mother, Fatemah.

We are sure the army is capturing us now. We will see each other another day dear world. Bye. — Fatemah.

The sickening tweet inspired the concerned, but ultimately ineffective, hashtag #WhereIsBana, with social media users turning to the platform the young girl had just evacuated in search of answers where none could be found. The fighting between the government regime and rebels in Aleppo that's spanned more than five years — nearly Bana's entire life — has escalated even more in recent weeks, with Reuters reporting that the United Nations estimates that about 30,000 people have been displaced in the latest push for the government to take back eastern Aleppo, an ongoing offensive that's marked a victory for the Russian-backed Syrian president, Bashar al-Assad.

It's a possibility, according to NBC News, that the Syrian government, whose interests the United States opposes, is responsible for the deletion of the account — a speculation that gains credence from the content of the final tweet, in which Fatemah alerted the world that the army was upon her and her children.

In the weeks before her tragic exit from social media, Bana, who has posted that she likes to read "to forget the war," publicly reached out to Harry Potter author J.K. Rowling, who in turn sent her the entire series in ebooks. She also began tweeting about the girl, posting on Friday a video of Bana updating the world on her increasingly treacherous life.

"Hello my friends. How are you?" Bana says in fluent but imperfect English. "I am on the run and now I am feared being killed. Please save us. Thank you!"

Citing activist groups, CNN reported that more than 600 people have died in Aleppo since Saturday, and conflicting figures as reported by Reuters estimate that there are at least 100,000, but possibly as many as 200,000, people still trapped in the rebel-held parts of Aleppo, where resources like food and medical care are scarce.

Right now, it's impossible for those of us comfortably following this story from the safety of our own homes to know which group has claimed Bana, at least for now. But New York Times writer Nicholas Kristof wrote in early October that it appears that people like her and her family have very little protections, and that the rest of the world — including President Obama — is passively, if not tacitly, condoning the inhumane treatment of the innocents there. There's evidence, in fact, that torturing these civilians could be a military strategy, as Kristof writes:

Russia and Syria appear to be deliberately targeting civilians like Bana. The aim seems to be to bomb and starve civilians into exhaustion and submission, so that they flee or no longer support the opposition, or else support extremists regarded as better fighters. That would bolster the Syrian government narrative that the opposition consists of terrorists who must be fought.

The world knows Bana Alabed as a girl who loves to read and to draw with her brothers, who is learning English, who misses her friend who died, who has witnessed death all around her and who has come close to experiencing it herself. She has a face, a name, she had pleaded with those using her and her family members, her neighbors, and her friends as pawns in a war to recognize her humanity and to save her. So many of us have watched this gut-wrenching tragedy unfold, feeling helpless and even hopeless as the young girl fought for survival. Now, she's been silenced — and it's unclear when or whether we'll hear from her again.