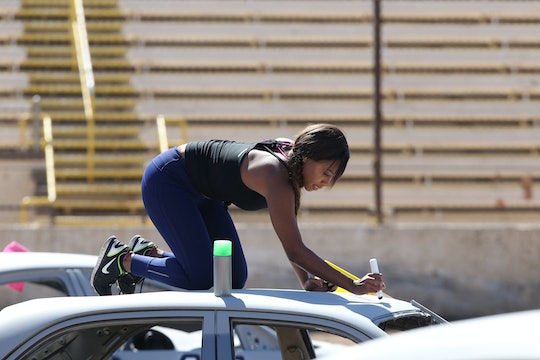 The first group date on Arie's season of The Bachelor was all fun and games until one person literally got hurt. So what happened to Brittany on The Bachelor? She went all in at the demolition derby group date, but unfortunately she received an injury and couldn't make it to the relaxed portion of the date. Although maybe she should consider herself lucky considering all the drama that happened at the "after party."

For the first group date, Arie decided to take the women on a car-themed date, because, in case you forgot, he's a professional race car driver. The women went on a demolition derby date, in which they all first got to decorate their own cars (my favorite was the woman who spray painted "Thx Emily" on the hood of her car). They then got the opportunity to smash into one another with their cars. After the requisite slow-motion suit-up and walk moment, of course. This actually looked like a ton of fun. At least, it did until I learned that Brittany took the date so seriously she actually accidentally hurt herself. But don't get too worried. She wasn't injured seriously, and she even showed up the next day for the rose ceremony.

At the start of the after party portion of the date — the part with champagne and fancy dresses — Jenna said in an interview segment, "We started the day with 15 girls, but Brittany smashed everybody with her car and unfortunately can't be here." For a second I honestly wondered if something tragic had happened off-screen that nobody was talking about and Brittany just went home. But no, it turns out that she was just a little too into adult bumper cars and wasn't feeling her best. After a day of smashing into other cars with your car, that is understandable!

"Brittany was complaining that she wasn't feeling well," Arie said, continuing, "I was really looking forward to spending more time with her and I just hope she's OK." Luckily, she was. At the cocktail party before the rose ceremony, Brittany smiled and joked that she was "still alive" when Arie asked if she was feeling better. She may have gotten injured, but it did win her the first tete-a-tete with the man of the hour, which apparently has been hard to come by for some women.

Brittany, for her part, has been a really good sport. "It was a fun day but it was really intense," she said to Arie during their short conversation. Arie apparently felt bad that Brittany had hurt herself, so as acknowledgement, Arie presented her with a certificate for the most "hard core." This would be sweet if earlier in the episode Arie didn't literally give another woman diamonds and Louboutin shoes.

Brittany seemed satisfied however, telling the cameras that she felt like her relationship with Arie took a step forward that day. "I feel like Arie and I definitely made a stronger connection today," she explained. Of course, she wisely couched this statement by adding, "But until you have that rose in your hand you can't get too comfortable." It's early in the game, but I think I officially like Brittany.

Strangely, Brittany's injury was not the most dramatic thing to happen in the house. While Brittany was recovering from something that I bet was fairly painful, Bibiana was getting more and more upset with the fact that she hasn't gotten very much alone time with Arie. Maybe a little whiplash is a fair trade for staying far away from all that drama.