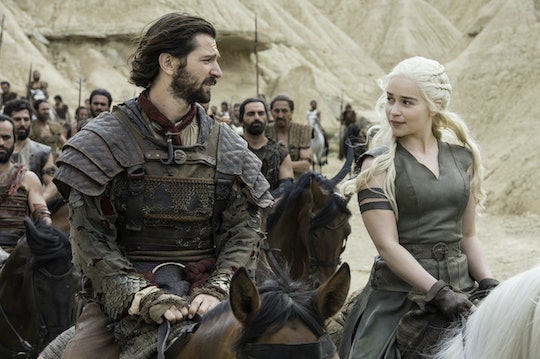 Daario Remains Loyal To Dany On 'Game Of Thrones'

Game of Thrones is back and there's a lot of ground to cover in the relatively short amount of time left to finish the series in a satisfying way. Seasons 7 and 8 will be the final, truncated installments of the show, so we really have to move at a clip to find out who wins the Game of Thrones — or whether it even matters because White Walkers will kill everything that lives anyway. Beloved characters are bound to fall by the wayside, so fans may be wondering: what happened to Daario Naharis on Game of Thrones? I think I speak for many fans when I say that he is sorely missed.

According to IMDB, Michiel Huisman is not scheduled to make any appearances this season, which means fans probably won't be seeing the character anytime soon. Daario, if you recall, is a lieutenant in the sellsword company that Daenerys wanted to hire for protection. When his two superiors suggested he assassinate the Dragon Queen, he proceeded to kill them instead and brought their heads to Daenerys. He pledged himself and the Second Sons to House Targaryen and joined Daenerys' army, alongside her dragons and the Unsullied. Daario stayed with her through the liberation of Yunkai and the seizure of Meereen. He even tracked her down on horseback with Ser Jorah Mormont when Drogon absconded with her in a last-minute rescue from the Sons of the Harpy. Of course, Daario is probably best remembered as being one of Dany's lovers, but they had a pretty sweet partnership.

Last season, Daario and Daenerys reunited in Vaes Dothrak, and while he wanted to make a low-key escape, Dany had other ideas. She burned down the Temple of the Dosh Khaleen with every single Khal inside of it and emerged from the burning embers unscathed. The Dothraki, who had gathered around the temple in curiosity, all bowed down to Daenerys. Daario joined them.

Leading the charge back to Meereen at Daenerys' side, Daario helped her defeat the Masters, alongside the Unsullied and the Dothraki. It was the last step on Daenerys' liberation tour before securing ships to sail to Westeros and take over the Iron Throne. But, at Tyrion's suggestion, she decided to break things off with Daario in order to avoid the complications of juggling a lover while trying to overtake Westeros. Dany ordered him to hang back in Meereen, keeping the peace along with the rest of the Second Sons, while a transfer of power is made between the now-defeated masters and the former slaves. Presumably, that's where he remains while Daenerys continues to expand her rule.