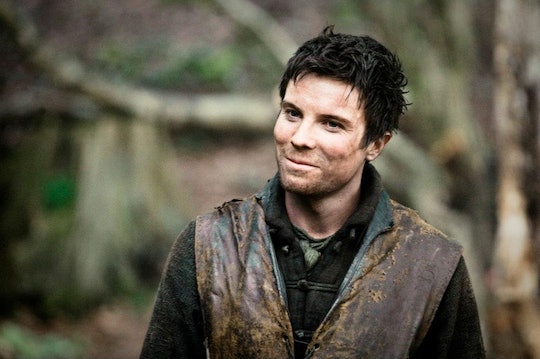 Over the years, many characters have come and gone on Game of Thrones but there's one character who fans can't help but still worry about. So what happened to Game of Thrones' Gendry? He was first introduced in Season 1 when he left King's Landing ahead of the purge of Robert Baratheon's bastards. Gendry was originally supposed to join the Night's Watch and ended up traveling with Arya. However, the pair, ended up being taken prisoner to Harrenhal, a Lannister stronghold, before they escaped. They were then captured by the Brotherhood Without Banners, who later gave Gendry to Melisandre in exchange for two bags of gold. (Rude.)

He was then taken to Dragonstone, where his Uncle Stannis resided. Melisandre is the one who finally revealed to Gendry that he's a Baratheon. She later seduced him and tied him to a bed so she could use leeches to take his blood for a ritual. After doing so, Gendry was then put in a cell beneath the castle, until Davos freed him. Gendry then climbed into a rowboat and escaped from Dragonstone, and he hasn't been seen since. However, many fans believe he may finally turn up again this season.

After the actor who plays the character (Joe Dempsie) was reportedly spotted in Belfast, Ireland, fans have come to believe he will be in Season 7. Of course, nothing has been officially confirmed about whether or not Gendry will return — but the actor did attend the Los Angeles premiere, basically solidifying his involvement in Season 7. Then there's the fact that something that was said in the season premiere has made fans even more confident Gendry will be back.

During the premiere, Euron promised Cersei he'd bring her a gift that would make her more open to marrying him. Some fans believe that gift could be Gendry. He is the only living Baratheon left and, besides Daenerys, the only person with a legitimate claim to the throne.

If Gendry is still alive somewhere, Cersei would most likely want him dead, just as her son Joffery wanted all of Robert's bastards killed back in Season 1. Unfortunately, if Euron is bringing Gendry to Cersei as a gift, that most likely means Gendry is dead or about to be killed. That would be a terrible way to return, especially for such a beloved character. But this is Game of Thrones, and no one is really ever safe on this show.

Hopefully, if Gendry makes a reappearance this season, he actually survives and gets to make a difference in the coming war. Maybe he'll even get a chance to reunite with Arya. Hey, one can dream.