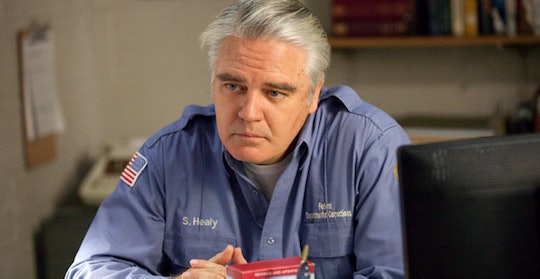 What Happened To Healy's Mom On 'Orange Is The New Black'? It Explains His Views Of Women

(Warning: This post contains spoilers from Season 4 Episode 4.) Remember when we first met Healy on Orange Is the New Black and he was really weird, warning Piper about the supposed dangers of lesbians within the prison? His backstory with his mom in Season 4, Episode 4 kind of gave us some insight into why Healy is so... Healy. But what happened to Healy's mom on Orange Is the New Black? Apparently she was a lesbian, but in his time as a kid, his father treated it more like a sickness than a discovery about yourself and who you are. Healy never even really redeemed himself as a lesbian-shaming adult man, even if some of us have come to feel a little sorry for him.

When we meet Healy as a kid in his Season 4 flashback, we immediately see a conversation between a roughly 10-year-old Healy and his dad about a supposed sickness his mother was being treated before. It isn't long before the "illness" his mother is suffering from turns out to be the fact that she is a lesbian and when Healy wonders if he'll inherit it himself, his dad assures him that "only women get it." Basically, Healy was doomed from the beginning to be someone to look down on women and see lesbians as sickly.

After young Healy and his dad pick his mom up from the hospital, she at first appears to be the perfect '50s housewife again, but after trying to feed him a late night snack of eggs (that he's allergic to), Healy's mom apologizes with, "Sorry, this new therapy — it makes my brain a little skippy." She then goes on to explain to Healy that she doesn't want to continue her "treatments", which sound like shock therapy, but kid Healy tells her that he likes her this way, the way his dad prefers her, too.

And after going outside to turn off the sprinkler system (never actually doing it, by the way), Healy's mom is gone and never heard from again. Which royally screwed him up enough to want to spend time with the disheveled homeless woman he meets on the street later on life and mistakes for his mom. What happened to Healy's mom on Orange Is the New Black, after she left? She was probably changed forever after having gone through intensive shock therapy treatments. Or, perhaps she was able to live a life that she wanted to live, without the confines of her husband's watchful — and harmful — eye.