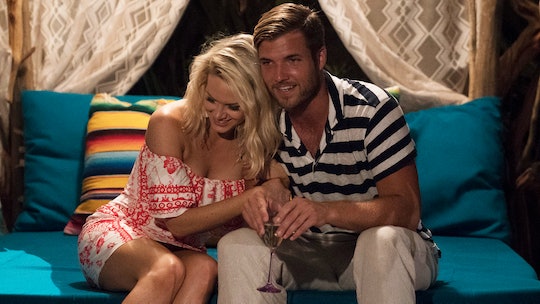 How Did I Forget About What Happened To Jenna & Jordan On 'Bachelor In Paradise'?

In the Aug. 12 episode of Bachelor in Paradise Season 6, Jordan Kimball returned to Mexico, and he shook up Blake Horstmann's world. The self-proclaimed "Mayor of Paradise" arrived and instantly delved into Blake's drama after a few brief discussions with Hannah Godwin and Nicole Lopez-Alvar. However, Jordan's grand entrance in the sixth season didn't make fans forget about his previous engagement to Jenna Cooper in Season 5. And now that Jordan is ready to get back in the game, everyone is wondering what happened to Jenna and Jordan on Bachelor in Paradise. As it turns out, the couple broke up shortly after their season ended.

Jordan and Jenna quickly fell in love during BiP, and the male model proposed to Jenna in the fifth season finale. However, their relationship did not go as planned. Merely a few hours prior to the finale, Bachelor Nation connoisseur Reality Steve released a series of text messages alleging Jenna was cheating on Jordan.

"Me and Jordan aren't together for real. I don't even like him let alone love him," one of the messages read. "I'm better than him and once I'm able to break it off for good and make up some story to make him look bad if it'll make you feel better. He means nothing to me and never has."

Shortly after the messages were released, Jenna published a statement to deny the allegations.

“I am aware of the allegations being made against me and they are simply untrue," the statement said, according to People. "I am choosing to focus on my relationship right now. Thank you for respecting my privacy at this time."

Nevertheless, the damage was done. Following the accusations, Jenna and Jordan broke up, and Jordan confirmed their split with a lengthy post on his Instagram account.

"I deal with unreasonable circumstances reasonably and have come to terms with a decision to remove myself from the relationship," he wrote. "It breaks my heart to think, feel and fall for this. It’s dropped me."

But this wasn't the end of the Jordan vs. Jenna saga. A month after the breakup, a rep for Jenna issued a statement which suggested Jenna used a "comprehensive forensic examination" to prove her innocence and that it was Jordan who changed after the show stopped filming. The statement courtesy of People said:

After the cameras stopped rolling, Jordan’s demeanor toward Jenna changed dramatically. He let it be known there was only room for one celebrity in the relationship, he was more successful and famous than her, she would never make as much money as him or amount to anything in life. She was belittled and made to feel insignificant and worthless. He continues to disparage her to this day. As painful as this has been for Jenna, she is glad he showed his true colors before they were married and began building a life together.

The publication also received a copy of the forensic examination Jenna's rep referenced in the statement, which concluded they "did not locate any of the text messages in the form published on realitysteve.com."

Meanwhile, Jordan denied the allegations. "I absolutely, 100 percent did not fabricate those text messages," Jordan told Entertainment Tonight. "I'll put my hand on the Bible for that."

Regardless of Jordan's past with Jenna, it looks like the Florida native is ready to spark up a new relationship in Mexico. When he arrived in Paradise, he told host Chris Harrison he was emotionally, mentally, and physically healthy.

“I can’t replace last summer, but I can put better memories ahead," he said.