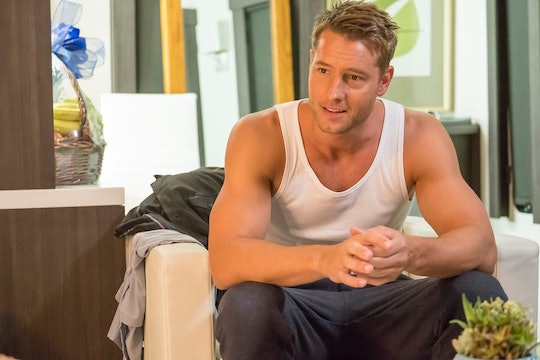 Fans have been speculating about the details surrounding Jack’s death since Kate showed Toby his urn back in Season 1, but now that we’re two episodes into This Is Us Season 2, there are plenty of other questions fans have developed since then. Like, what happened to Kevin’s leg on This Is Us? His injury and cast might be an indicator in the timeline of Jack’s death, as it was shown for the first (and only) time at the end of the Season 2 premiere, presumably around the time of Jack’s death.

Barring any black magic from Sophie, who’s been a solid supporter of the "break a leg" good luck mantra for Kevin, the most logical thing that could have happened to Kevin’s leg is a sports injury. We already know that both he and Randall played football for their respective high schools and when Kevin’s cast was shown for the first time, he was wearing his letterman's jacket, which might be the show’s sly way of explaining how his injury took place.

The cast itself, in addition to some signatures from friends, has a football drawn on it along with #1, which definitely makes it seem like Kevin’s leg cast on This Is Us was the result of a football injury. It might even be a roundabout reason he got into acting rather than sticking with football, but let's deal with one mystery at a time here.

The end of the Season 2 premiere brought with it a handful of new, loaded questions, whose answers no doubt play a big part in the bigger revelation of Jack’s death as the season progresses. Like, that redhead with Randall, seemingly comforting him, or that dog Kate was holding on Miguel’s couch, and of course Kevin’s cast and what happened to his leg. At a People and Entertainment Weekly viewing party for the This Is Us Season 2 premiere, the cast opened up about the new mysteries and how they might play a role in revealing more about Jack’s death as the season goes on.

"There were some clues I don’t know if people picked up on — Kate was holding a dog, Randall’s got a girlfriend, and Kevin has a broken leg," Mandy Moore said. "These are all things that I think people are going to see sort of the origin of in the next couple of episodes, leading up to figuring out a bigger piece of the puzzle."

Milo Ventimiglia also teased to Entertainment Weekly that the now monumental final scene of the Season 2 premiere was a big setup for the timeline surrounding Jack’s death on This Is Us, which also includes Kevin’s cast and how that impacts his own character’s path.

"He’s a star athlete with the busted leg. Does that change his course in life? Because even little Kevin in the Thanksgiving episode talked about wanting to play quarterback for the Steelers when he grew up," Ventimiglia pointed out. "Was that really a possibility? And is that how his life and world changed and [set up] the path that he took to get into acting? There are a lot of those things. You have to pay attention to these things being introduced to the story, and then you’re going to understand the timeline."

I think it’s safe to say that Kevin’s leg injury on This Is Us stemmed from hurting himself during a high school football game, but the real mystery is when it happened and how that coincided with Jack’s death and the house fire. But since viewers don’t yet know if Jack died in the fire on This Is Us or died as a result of it, the timeline for the night at the end of the Season 2 premiere is still a little hard to figure out.

Even if Kevin’s leg injury itself isn’t nearly as important as what his cast signifies (i.e. Jack’s death), it’s easily another mystery fans will be following this season.