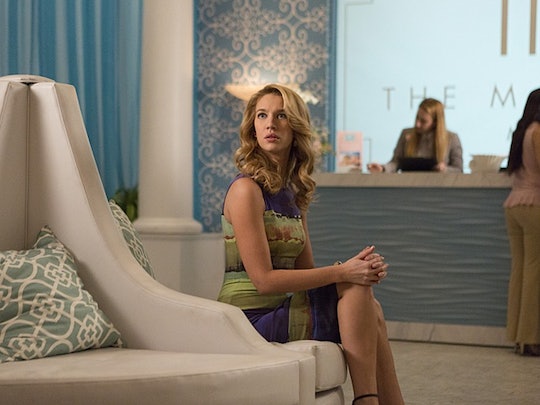 What Happened To Petra On ‘Jane The Virgin’? No One Saw It Coming

The last few weeks of Jane the Virgin's second season have been slowly building towards something with Petra, devoting a little bit of time each episode to her crisis of faith. First, there was Petra's struggle to be home with the babies, then what seemed like a growing acceptance of the fact that postpartum depression was affecting her. It was a meeting with her mother that sent Petra spiraling. Her awful mother suggested that Petra could only do right by her newborn daughters if she gave them away, and in Monday's "Chapter Thirty-Nine" episode, Petra finally gave in to her mother's bad advice when she got on a bus out of town. So, where did Petra go on Jane the Virgin?

Technically, nowhere. Petra didn't get a whole lot of screen time in Monday's episode, but the time she got was very telling — or so it seemed. The show set up Petra's storyline very carefully. She told Rafael her postpartum medication was making her sick so that he would take care of their daughters, then the next time we saw her she was dyeing her super luxurious blonde hair brown in a mysterious bathroom, a.k.a. the number one sign that a person is about to change their identity and book it (we've all seen Gone Girl, right?). The signs continued to accumulate as Petra took out a large sum of money and finally got on that bus in a very un-Petra-like hoodie and sweats. The episode withheld just where Petra was going, but this time (unlike last week's "Chapter Thirty-Eight") she was definitely gone. Or so it seemed.

Petra merely cast one longing look at a picture of herself and Rafael in a magazine as the bus pulled away, but otherwise viewers didn't get a hint as to what was going through her mind. When Petra next appeared, she was back at the Marbella, creating a little bit of cognitive dissonance (did she change her mind?) until she knocked on a hotel room door and that door opened to reveal...Petra?!

Jane the Virgin pulled one of the most classic soap opera twists imaginable: a long lost identical twin. The show did such an excellent job of making Petra's potential departure feel so real that it came completely out of nowhere, catching the audience as unaware as Petra herself. Her brunette sister wrapped Petra up in a hug just as Petra made the expression everyone watching must have made: total, utter confusion.

It's a fun twist on a storyline that seemed to have a definite end, but taking something that seemed predictable and making it into something new and exciting is just what Jane the Virgin does best.