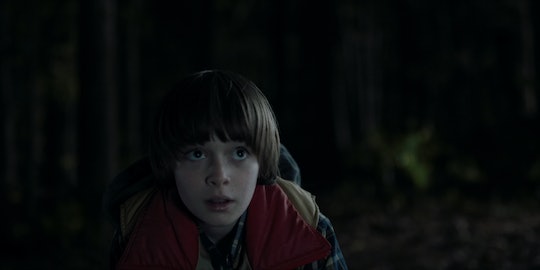 Will Has Already Been Through A Lot On 'Stranger Things'

I've been waiting for Stranger Things Season 2 since... well, maybe a week after Season 1 dropped. I have a feeling many viewers feel the same, especially because for a while, the show took over the internet. Social media was especially fascinated with Eleven, Eggos, and of course: Barb. The plot of the show, however, was a bit more convoluted. Since it's been over a year, some viewers may need a refresh on what took place, particularly when it comes to what happened to Will in Stranger Things Season 1. He escaped the Upside Down, but a cliffhanger suggested he may not be completely OK.

While viewers barely saw him, Season 1 of Stranger Things really centered around Will. While biking in his hometown of Hawkins, Indiana in 1983, Will got spooked by a noise in the woods. He ran home but neither his mother nor his brother were there; a figure was still following him. He then disappeared, and his family had no idea where he had gone. Will was taken to a parallel universe called the Upside Down, and the figure who chased him was a monster who brought him there. The entire town of Hawkins searched for Will throughout the season. His mother — '80s queen Winona Ryder — Joyce, his brother Jonathan, and his friends were the most dedicated to finding him.

Some residents believed Will was dead — and the Hawkins National Laboratory actually made an effort in covering up the truth with a fake dead body. Thankfully, his family and friends refused to believe he had died. Police chief Hopper also believed Joyce when she said her son was alive, and dedicated himself to finding him (I doubt there were many other police matters in Hawkins, anyway). At the end of the season they were able to rescue Will from the Upside Down. As it turns out, the Demogorgon (the monster) that escaped the dimension was a result of experiments at the laboratory (which is also where Eleven honed her powers).

In the final scene of Season 1, Will was seen eating dinner with his family. He excused himself to go to the bathroom, where he coughed up a slug-like substance and envisioned the bathroom as the Upside Down for a second. He kept this terrifying occurrence from his family. What could this possibly mean? The slug could've been a lingering animal from the Upside Down that remained in Will even after getting rescued, so maybe it doesn't mean anything.

I have a feeling that won't be the case, though. Will's vision of the Upside Down proved that it hasn't quite left him — could it still be controlling him? "He seems to be seeing images from the Upside Down — the question is whether they’re real or not," Stranger Things co-creator Matt Duffer told Entertainment Weekly. Noah Schnapp, who plays Will, was upped from recurring cast to series regular for this season, so whatever's going on with him will be addressed. One theory on Reddit by angelfacedweirdo muses that the Demogorgon is not dead, and can use its victims, like Will, as vessels.

This sounds a bit out there, but remember: Stranger Things itself is "out there." I think this could definitely be a possibility. Maybe Will is now part monster, or is a carrier for future monsters. The line between the real world and the Upside Down may collapse because of him. I'm just theorizing now — but I believe Stranger Things Season 2 will reveal what on earth the slug creature means.