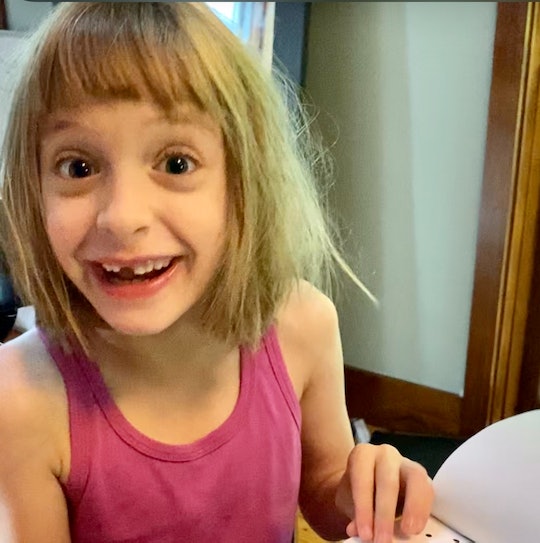 My daughter Freyja is the most extroverted person I’ve ever met. She will talk endlessly to anyone who will engage with her. By contrast, I am that person who wears earbuds even when nothing is playing just to send the signal that I don’t want to talk to anyone. But my daughter, who has a neurological disability that requires her to wear leg braces and use either a walker or a wheelchair, regularly approaches random strangers to strike up a conversation about their dog, their outfit, or their lunch, and insists on telling them all about the lights on her wheelchair, the chickens we have at home, or what she dressed up as for Halloween. Often she bonds with a person enough that she wants to hug them when she says goodbye and then promise to stay in touch with them forever. This year Freyja has been struggling with her health and I worried we’d be in the hospital for her eighth birthday. We needed to keep things quiet and calm, so instead of parties and gifts and excitement, I asked people to make a video for her.

Freyja’s bright and social personality has led her to having her own Facebook page that I manage and a bunch of followers she’s met maybe once — or never. She has some truly dedicated fans who get a lot of out knowing her, however superficially. Her voice, her speech, her facial expressions are all unique and endearing, and she likes to make videos for me to post. So when I asked people to return the favor and make her feel special on her birthday, I knew some people would come through, but I could never have expected what really happened.

I posted a simple request:

Hey friends! Freyja's birthday is coming up and as you know, it's been a hard year for her. Instead of gifts, I’m asking for videos for her to watch. Would you please take a moment to wish her a happy birthday, to just say hello, or to show her a bit of your daily life? Friends, family, strangers, animals, whatever -- all are welcome! So please share! Her name is Freyja (Fray-uh) and she's turning 8. Thank you so so much for helping make it a special day for her!!

I provided a link to a public Google photo album, posted my cell phone number online, and wondered with not a little bit of trepidation if that was a wise idea.

The first video we got was from a cousin who was on vacation in Hawaii. She was wearing sunglasses and a lei. She said aloha! and sang happy birthday from a sunny beach. Then other videos rolled in, slowly at first, from friends and extended family. Soon their friends and extended family were making videos, too, sending them from places around the world. One friend made a video of herself walking around a beautiful lake in Wisconsin. Another was in the middle of Times Square, another at a baseball game in Oakland. A surprise video came from an entire classroom of preschoolers in Mexico singing happy birthday in Spanish. A child living in Uganda awaiting adoption by my dear friend made a video. Friends from Norway, Sweden, Iceland, and Germany celebrated Freyja in many different languages.

What got me was everyone who had made a video had been sure to pronounce Freyja's name correctly. They knew the exact date of her birthday and how old she would be.

We got dozens of videos from children, most of whom had never met Freyja in person but had watched her videos and seen her pictures online. Some dressed up, others drew pictures for her that they displayed on camera, and most sang. Some chatted as though with an old friend, telling Freyja when their birthdays were, describing their pets or their last birthday party or their favorite flavor of birthday cake. Some of the kids had the same diagnosis as Freyja and she was thrilled to see them. Other kids and adults had other visible disabilities, and she was delighted to notice their leg braces or wheelchairs or G-tubes. She squealed when she saw another child’s purple walker.

Videos poured in from past teachers, babysitters, therapists, classmates from years ago. A friend of the family connected with Kristen Bell, who recorded a message announcing that she (Princess Anna) conferred with Queen Elsa and they were making Freyja an honorary princess of Arendelle for her birthday.

Many people asked their friends and families to make videos, too, and soon we were getting tons of videos from people we didn’t know. A former co-worker of mine had an adult daughter in the Air Force whose oldest child was the same age as Freyja. She made a video, her kids made videos, her kids’ entire classes made videos... and then she pulled out all the stops. She asked her colleagues deployed around the world to make videos, and soon we had dozens and dozens of videos from military academies around the country and Air Force bases around the world as far as Siberia, and one from the very cryptic “undisclosed location in the Middle East.” Some were from individual soldiers, but many were of entire battalions and classes. Many of the active duty military also had pals on police forces, so we got a few videos from officers in squad cars and on the beat. They also sent gifts: One Air Force squadron sent a care package of banners, pins, T-shirts, and a personalized plaque; a few classrooms of young children made cards that reached us through a friend. It was unbelievable.

What got me was everyone who had made a video had been sure to pronounce Freyja's name correctly. They knew the exact date of her birthday and how old she would be. Many knew some of her likes and dislikes and showed her things they knew she’d be excited about. They all took the time to learn enough about her life to refer to her disability by name, her sister by name, her cats by name.

Freyja was amazed. She was discharged from the hospital a week before her birthday, but her recovery was long and slow. The videos and messages cheered her up like I could never have expected. She watched and listened to them over and over. They made her feel seen and they made her feel special. For a few days, she was able to forget her medical issues, her pain, and her exhaustion. The videos buoyed her through her recovery more than any gifts could have and have carried her into her eighth year feeling loved and supported.

I'm still stunned. I was so touched by the humanity of the whole thing. I had sent out a call into the ether and put my phone number on the internet, wondering if I would hear nothing but an echo, or worse. Instead, the responses came in loud and clear, and they're still reverberating through our lives. Disability and illness can be very isolating, but sometimes, just when I most need to know it, the world reminds me that I'm not alone after all.