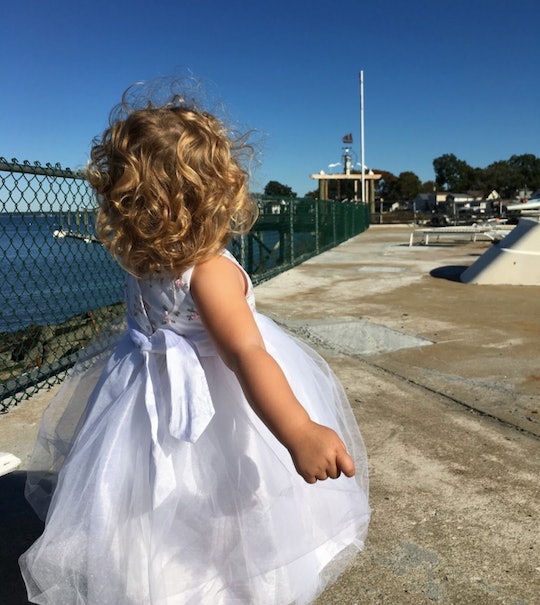 What Happened When I Stopped Complimenting My Daughter's Appearance

The first thing most people notice about my daughter is her appearance: her curly blonde locks, her chunky, ready-to-eat toddler thighs, and perfectly pinchable cheeks. I’ll admit it is hard not to talk about her beauty. (Yes, I am being a proud — and boastful — mama right now; sue me!) But there is more to my daughter than her looks. There’s more there than a big, happy toothy grin, her mischievous smile, and her striking, hazel-colored eyes — and the more I thought about it, the more I wondered what would happen if I stopped complimenting her looks and paid attention, instead, to her beautiful mind. Comments like that put her looks front and center and great, but I don't want those to be the only things she hears — especially from her parents.

From day one I've made every effort to tell my daughter I told her how sweet she was, how strong she was, and how smart she was:

You’re Mommy’s big, strong girl, aren’t you? And you’re so smart too!

I admittedly compliment her less now than I should. Perhaps it's because of the Terrible Twos. Perhaps it’s because I often find myself at my wit’s end. These days, our complimentary rapport has been replaced with “no,” and “What’s in your mouth?” and “Get down! We don’t stand on the dining room table!” So when this experiment came my way, I jumped at the chance to write about — and focus — on something that truly mattered.

What It Did For Her

My daughter was playing vet, opening and closing the kennel doors to weigh her two tenants — a black cat and an orange bulldog — when I stopped her to say:

You are so smart. Do you know how smart you are?

“Yeah,” she said dismissively before returning to playing.

Cute, right? But what the hell does that mean? What could I infer from her one-word answer?

After spending a few days thinking about it, I think it’s safe say she is pretty freaking confident in the intelligence department. When I ask her other questions, like what color something is, she pauses, thinks — often saying “um” to fill the silence — and then wages a guess. (She always guesses green first and, shocking news, green is rarely the right answer.) But this question she answered with authority and conviction. There was no hesitation in her response, no pause, and no second-guessing. There was no “uh,” or “um,” just a simple acknowledgement. And while her confidence often makes me giggle, it also thrills me, because my daughter is smart, and knows she is smart. Period.

That said, did I slip up? Sure. It’s hard not to tell my little girl how gorgeous she is, but I don’t think she cared either way. She ran around the same way she always does, with a wide toothy grin and glint of mischief in her eye. She didn’t seem to need reassurance — hell, she told me, “Mommy, I pretty” on her own — and she didn’t seem to miss compliments on her looks coming from me.

What It Did For Me

As I placed my daughter down for a nap one day, I thought long and hard about her intelligence and her confidence. I know I am her mom, but really, she is so amazing and such a smart freakin’ cookie that it kills me. (She is also sassy, self-assured, and very, very opinionated.) I thought, wow, I am doing good; I am a good mom, not because my daughter is smart — I take very little credit for her intelligence — but because I’m making sure my daughter values her smarts. I work damn hard to let her know she’s more than just a pretty smile, and it felt awesome to let her know she was more than society still perceives she can, and will, be. But then I felt a tinge of sadness and a pang of guilt. Was she? Is she? Am I painting the full picture here?

I was complimenting her mind, but I was ignoring her body and her beautiful soul, and I wondered if this action — if this type of complimenting — would actually do more harm than good down the road.

While I spent a full week complimenting my daughter’s intelligence and not her appearance, I do believe there is a time and place for complimenting a child’s looks — and with body image issues at an all-time high in America (approximately 91 percent of women are unhappy with their bodies … 91 percent!) it is a dialogue we must have. The problem, as I see it, is that these two dialogues (brains vs. brawns or — in this case — beauty) are not exclusive, and cannot be.

We can’t focus on one and ignore the other because in doing so we ignore an entire aspect of their being and their identity. Sure, I want to instill confidence and book smarts in my daughter, but I also want to instill street smarts and body awareness. And since the physical is the first thing complete strangers judge us on (like it or not, it’s true), I want to raise her with the confidence and tools to navigate both worlds, and both sides of her being.