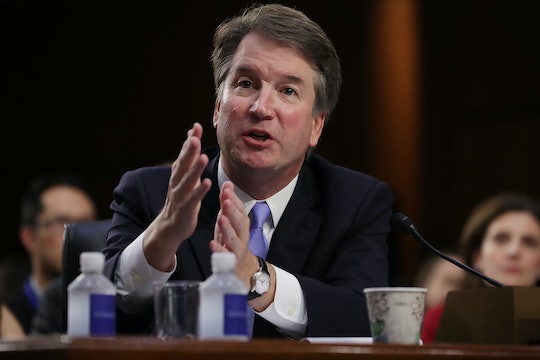 This Is What Could Happen If Brett Kavanaugh Is Confirmed

The United States Senate judiciary committee is in a state of crisis at the moment. President Trump's Supreme Court justice nominee, Brett Kavanaugh, has officially been accused of sexual assault or misconduct by three separate women. He is still in the process of his confirmation hearing, and the pressure is on for those hearings to come to a halt while those claims are investigated. However, it looks as though the GOP are planning to press on with the confirmation regardless of these allegations, which begs the question of what will happen if Kavanaugh is confirmed? If he does make it to Supreme Court justice, will there be any recourse if these allegations prove to be true?

On Wednesday a third allegation of sexual misconduct was brought against Kavanaugh by Julie Swetnick. She released a statement via her lawyer that she was gang raped in the early 1980's during a high school party in Washington D.C., where she contends she was given drugs to incapacitate her and render her incapable of giving consent. Swetnick alleges that Kavanaugh did not participate in her assault, but that he was part of a group of boys who watched it happen. Kavanaugh's first accuser, Dr. Christine Blaisey Ford, alleged that he attempted to rape her at a party around the same time. The second accuser, Deborah Ramirez, accused Kavanaugh of exposing himself forcibly to her during a party when the two were at Yale University.

Kavanaugh has denied all accusations of sexual misconduct, according to AP News.

Romper has reached out to the White House and Kavanaugh for comment and is waiting for a reply.

Despite the severity of the allegations put forth by these three women, Senate Judiciary chairman Chuck Grassley said on Wednesday that Kavanaugh's confirmation hearing scheduled for Thursday would move forward as planned, according to CNN. Republican Sen. Jeff Flake, who also sits on the Senate Judiciary committee, spoke publicly about the allegations on Wednesday and warned that the committee may "have to be prepared for the possibility, indeed the likelihood, that there will be no definitive answers to the very large questions before us."

Senate minority leader Chuck Schumer said he believed these allegations should be considered grounds to suspend the hearings until further notice, and that he also believed Kavanaugh should "withdraw from consideration." But what happens if Kavanaugh somehow manages to skate through these hearings and ends up sitting on the SCOTUS bench?

Good luck getting him off that bench ever. Supreme Court justices sit on the bench until they die, resign, or are impeached. And only one SCOTUS member has ever been impeached in the history of the United States. Justice Samuel Chase was impeached in 1804 for politically motivated reasons, according to History.com, but actually managed to stay on until 1811. After that the only other SCOTUS member to retire under threat of possible impeachment was Abe Fortas in 1969. The difficulty being this job is the most secure job in the country, and Supreme Court justices hold on to those jobs unless they do something while serving in the office. In other words... if he is confirmed these allegations might not change anything. Even if the FBI investigates and finds them to be true, he will essentially be untouchable.

If Brett Kavanaugh is confirmed without allowing these three women to be heard it will really say something about this country. It will say that male privilege and power is more important than three women and their alleged sexual assaults. And what message will that give Kavanaugh, a man who has proven elusive on issues that matter to women in the past (like the protection of Roe v. Wade, according to CNN), about his own power as a SCOTUS justice?

He will believe he is above the law. And he will be right.