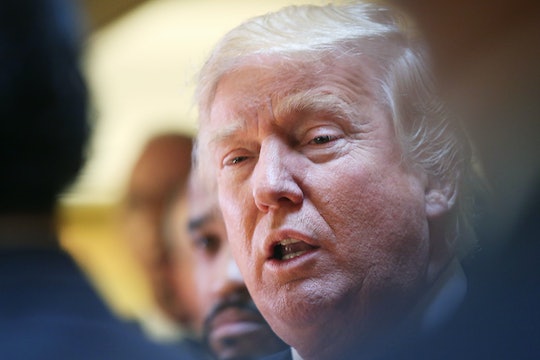 What Happens If Donald Trump Wins New York? His Lead Is Significant

Tuesday, aka the day of the New York primary, is slated to be a big one for former Secretary of State (and former New York Sen.) Hillary Clinton and business mogul Donald Trump. Why? Both candidates are loosely expected to win their parties' respective nominations, and polls predict each candidate will not only win, but will win by a large margin. (Though there's still a chance that Vermont Sen. Bernie Sanders supporters could show up in unpredicted numbers and give Clinton a run for her money.) However, how important is it for Trump to win the Empire State? What will happen if Donald Trump wins New York? Well, a lot — especially if Trump wins, and wins big.

More Like This
Here's What You Need To Know If (When) Your Baby Eats Sand
20 Candid Photos Of Queen Elizabeth With U.S. Presidents Over The Years
25 Great Sci-Fi Movies To Watch As A Family
20 Great Movies About Fathers & Sons That Will Make You Laugh & Cry

New York has 95 Republican delegates up for grabs, making it one of the most delegate-rich states for the GOP. (According to ElectoralVote.com, only California, Texas, and Florida offer more delegates.) And while New York is not a "winner-takes-all" state — 81 delegates are appointed proportionally based on congressional district results and the remaining 14 are considered "at large" — if Trump wins by a margin of 50 percent or more, he will automatically be awarded all of the at-large delegates and he may win entire districts, according to USA Today. (New York has 27 congressional districts, and each district offers three delegates. If Trump gets less than 50 percent of the vote in any particular district, he will get two delegates and the second place finisher will pick up one delegate. However, if Trump crosses that the 50 percent threshold, he will claim all three delegates.)

Of course, taking 95 delegates would be huge, for Trump or any of the GOP candidates, because in order to win the Republican nomination, one must have 1,237 delegates. (Trump currently has 744, according to Politico.) However, as Patrick Murray, director of the Monmouth University Poll, explained in a recent interview with USA Today, whether or not Trump will hit that margin in every district remains unclear.

The real issue is whether he gets over the 50 percent mark in every congressional district.

What's more, while Trump's sweep would be significant, it would also not be unprecedented — Trump has been slated to win his home state for months. (And to win big.) In fact, in January, Trump's lead shot into the double-digits, and, by February, that margin increased to 20 points or more, according to HuffPost Pollster.

Whatever happens Tuesday night, one thing is for sure: All eyes will be on New York.