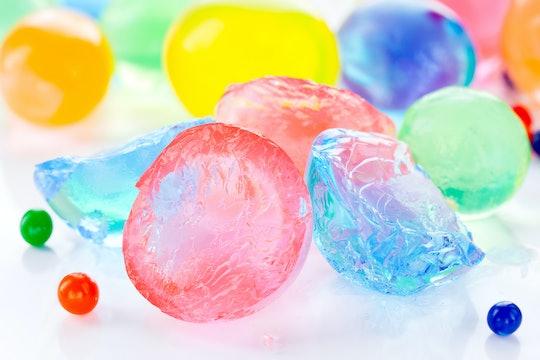 Here's What Happens If Your Kid Eats Water Beads

It's pretty universally agreed upon that kids aren't known for their great decision-making skills. Add in the fact that kids also like to put things in their mouths, and you've got a recipe for disaster. With so many toys making the rounds on Pinterest, like water beads, it's especially important to be vigilant. If you're wondering, "what happens if my kid eats water beads," be aware: it's not exactly a fun situation to find yourself in.

Water beads have become a craze over the last few years. Touted as both a sensory play toy and a fun way to fill vases and jars for decorations, many blogs have lauded water beads as a great thing to have in your home. But no matter how many non-toxic labels are slapped on the toy, the truth of the matter is that water beads aren't always safe — if swallowed, they are especially harmful.

Sarah Brown, community safety expert for SafeWise, tells Romper that she does not recommend giving a child water beads because of how harmful they can be if swallowed. "If they are swallowed, they can create an obstruction in the child's gastrointestinal tract," Brown says. "The water pods expand to over 400 times their original size, and they can expand inside your child's body. Many children have undergone surgery because of these water pods; some children have swallowed several, needing extensive surgery."

Brown isn't the only expert cautioning parents. The American Academy of Pediatrics (AAP) has also warned families that swallowing water beads can be incredibly harmful and if your child does ingest them, they'll need medical attention right away. According to the AAP, there are some signs you can look out for if you suspect that your child has swallowed one or several water beads. The toy may be causing a blockage if your child is refusing to eat, drooling, vomiting, wheezing, complaining that something is stuck in the throat or chest, complaining of abdominal pain or constipation, or has abdominal swelling and soreness.

Brown suggests that because the water beads are small and brightly colored, many children may see them as candy and ingest them without thinking. If you give your children water beads to play with, be sure to supervise them so you can avoid a trip to the emergency room. If your child does swallow them, seek medical attention right away.