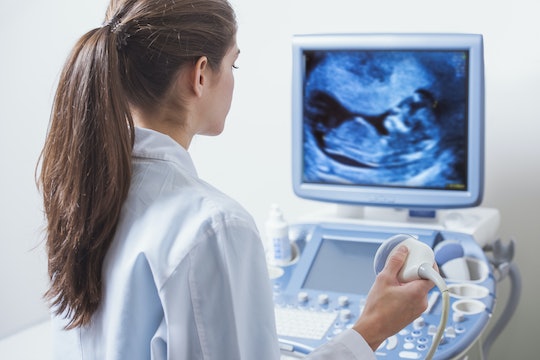 A pretty common fear for pregnant women, I’ve found, is the fear of the umbilical cord getting wrapped around their baby’s neck — whether in labor or even during an ultrasound. It sounds pretty scary — your sweet baby having something that could potentially be prohibiting them from getting all their necessary nutrients and oxygen — but what happens if the cord is around the baby’s neck? Is it always life-threatening like medical dramas on TV lead us to believe?

Dr. Idries Abdur-Rahman, an OB-GYN and medical travel blogger for TwinDoctorsTV, says in an email interview with Romper that the umbilical cord being wrapped around baby’s neck occurs in about 35 percent of pregnancies, and usually, nothing happens. Thankfully. Also known as a “nuchal cord,” when this happens, “it’s usually loose so the blood flow from the placenta to the baby really is not affected. If the cord is wrapped a bit tighter, as the baby comes down into the birth canal during labor, the baby's heart rate may drop as blood flow to the baby is reduced,” Abdur-Rahman explains. However, there are things your birthing team can do to improve blood flow to your baby, “including changing mom's position in bed and putting a little fluid into the uterus — a procedure called amnioinfusion,” he says.

If those tactics don’t work, and the chord is just wrapped too tightly around the neck and the baby isn’t getting enough blood flow during labor, “time is often of the essence and a C-section will be necessary,” he adds. “Thankfully, again, there are things that can be done to improve blood flow to the baby while preparations are being made for a C-section, including position changes for mom, putting fluid into the uterus (like we mentioned above), as well as medications to stop mom's contractions, which also improve blood flow to baby.”

Sometimes the umbilical cord can be found wrapped around your baby’s neck during an ultrasound. And that’s also nothing to fret about, according to Abdur-Rahman. “It's a fact that the umbilical cord will be found wrapped around the baby's neck on ultrasound from time to time, and while this understandably sounds alarming to most expectant parents, this occurs way more often than you would think and it is usually of no consequence,” he explains. “When you consider the fact that the average umbilical cord is about 20 inches long, it's no surprise that a nuchal cord is present in roughly 35 percent of all pregnancies and deliveries.”

Unfortunately there’s really no way to prevent this from happening, but it’s not always a terrible thing when it does happen. “For those rare babies who exhibit problems during labor because of a nuchal cord, a C-section usually results in a happy and healthy baby,” Abdur-Rahman says. So if you’re told at your ultrasound — or even during labor — that the cord is wrapped around your baby’s neck, try not to fret too much. Everything typically turns out just fine.