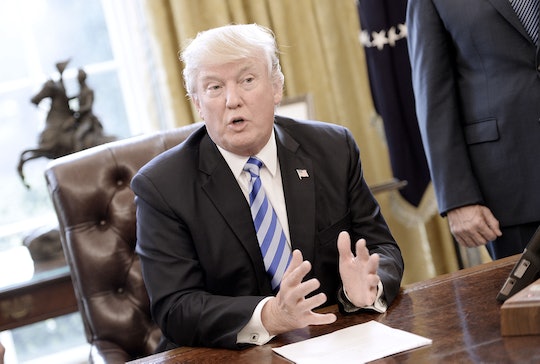 On May 4, the American Health Care Act passed the House of Representatives by a 217–213 vote after needing 216 to successfully pass, much to the delight of President Donald Trump and many Republican leaders. The bill will now be taken up by the Sentate, and many question whether it can pass there as it is written now. So what happens if Trump can't repeal Obamacare with the AHCA? It would certainly have an effect on everything from health care to tax reform to the reputations of Republican politicians across the board.

In March, before the second AHCA vote that passed the House, Washington Monthly reported that "failure to repeal Obamacare puts the entire Republican agenda at risk." The outlet argued that failing to pass the bill to repeal Obamacare would damage the control Republicans have in Washington right now. The same could still be true even though it's now passed the House — failing to do so in the Senate wouldn't look good for the GOP either.

And when it comes to health care, the revised version of the bill allows states to waive certain Obamacare protections that keep insurers from charging people more based on their health and any pre-existing conditions they have, according to The Hill. Presumably, those protections would stay in place if the AHCA can't pass and Trump can't repeal Obamacare.

According to Bloomberg, the House may actually have to vote again on the revised AHCA, because "there’s a chance that parts of it may need to be redone," and House Speaker Paul Ryan still hasn't sent the bill to the Senate. According to that outlet, House leaders want to make sure the bill follows Senate rules for reconciliation, which would allow Senate Republicans to pass the bill with a simple majority. "Congressional rules would likely prevent Republicans from fixing the bill after it’s in the Senate," according to Bloomberg, so revising it again before it even gets there might be in the cards.

All of that doesn't suggest that Republican leaders are all that confident the repeal of Obamacare can pass the Senate as it's currently written. And they may in fact be worried about what the bill not passing there would do to their standing in politics — and what it might mean for future elections.

If Obamacare is not repealed, that would definitely have a political impact. Republicans may choose to keep bringing bills to repeal the Affordable Care Act to the table until something passes both the House and the Senate. Or, they could continue to try to pass a repeal bill to no avail, and that could convince some voters that the GOP can't get anything done and would then impact their chances in midterm elections.

But what about health care? How would it be affected if Obamacare is not repealed? Well, for now, as aforementioned, individuals with pre-existing conditions would still have the protections of the ACA. Good Health also reported that some freelancers and low-income Americans depend on Medicaid — which is supposed to see funding cuts in Trump's new budget and under the AHCA. Some of those cuts may still happen, but some of the proposed cuts only appear in the AHCA, so a decrease in support and funding for Medicaid would look different in a reality where the AHCA doesn't pass versus one where it does.

Business Insider reported that if the repeal of the ACA is delayed, in theory, the exchanges put in place by Obamacare would remain intact, "meaning that the more than 20 million people with ACA-based plans would still be covered." That's clearly a big deal for a lot of people who rely on or got insurance for the first time under Obamacare.

CNN Money reported one other area that may be affected if Trump can't repeal Obamacare: tax reform. The outlet spoke with a former Senate Budget senior staffer and current economic policy advisor at the Bipartisan Policy Center, Steve Bell, who said, "The defeat of health care reconciliation threatens to derail the entire Trump economic plan. Period. The balkanization of the GOP will continue. And Trump becomes an anchor around some GOP incumbents' necks." No pulling punches there, I guess.

The outlet reported that if the Obamacare repeal ultimately fails, Republicans may try to move forward with tax reform to try to get over the loss quickly, but that they'd possibly do so "with very sobered expectations as to what they can accomplish." Dean Zerbe — a former senior counsel to the Senate Finance Committee chairman who is currently the national managing director at alliantgroup — told CNN Money: "It will all be more modest." He suggested that there would be lower tax rates if the GOP went ahead and pushed through tax reform, but they probably wouldn't be as low as previously promised as a result of the AHCA not passing and repealing Obamacare.

If Trump's attempt at an Obamacare repeal is defeated, it would affect political reputations, national health care, and the possibility and particulars of tax reform. The AHCA has not yet been sent to the Senate, but if you feel strongly that it should not pass, contact your senator here and tell them to vote no on the American Health Care Act when it reaches their chamber.