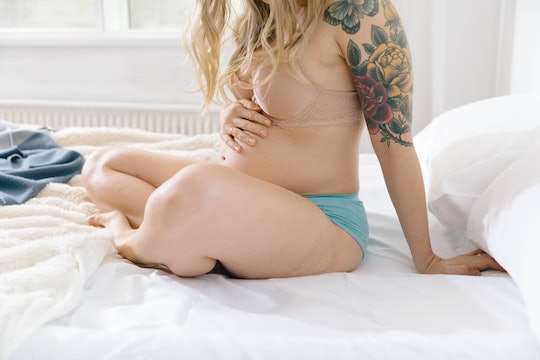 Everything You *Need* To Know About Having The Flu During Pregnancy

It may be true that it is barely mid-October and Halloween hasn't yet passed, but a quick look around at a department or grocery store will tell you otherwise — the holiday season is near. Of course, snowy days and family get togethers also come hand-in-hand with flu season and, if you are pregnant, then you might be thinking about the best ways to protect yourself. Whether you are weighing your options with the flu vaccine or planning to stock up on vitamin C, it's common to wonder: What happens if you get the flu during pregnancy? As you may have guessed, experts say it's important to get immediate care.

“If you are unlucky enough to get the influenza virus while pregnant, you need to notify your provider immediately," Dr. G. Thomas Ruiz, an OB-GYN at MemorialCare Orange Coast Medical Center in Fountain Valley, California, tells Romper in an email interview. "There are anti-viral medications that, if given within 72 hours of exposure, can help you recover quickly from the illness. Untreated influenza in pregnancy can be very serious for the mother, from the typical symptoms of cough, high fever, and body aches and pains to respiratory failure."

Dr. Sherry Ross, an OB-GYN and women’s health expert at Providence Saint John’s Health Center in Santa Monica, California, explains to Romper the reason pregnant women are more susceptible to the flu — and subsequently subject to more serious symptoms — is because of the changes that occur to the human body during pregnancy.

"In pregnancy, there are changes in the immune system, heart, and lung function that make pregnant women more prone to severe illness from the flu, which can lead to hospitalization, or even death," she says, adding that other complications as a result of the flu include dehydration, miscarriage, and preterm labor.

Like Ross, the Centers for Disease Control and Prevention (CDC) maintains that the flu is more likely to cause severe illness in pregnant women than in women who are not pregnant, therefore making the flu vaccine not only a safe, but wise choice during pregnancy. According to the CDC, getting the flu shot during pregnancy has been shown to protect both the mother and her baby from the flu for several months after birth (up to 6 months of age).

"A flu shot can protect pregnant women, their unborn babies and even the baby after birth," Ross says. "When given in pregnancy, the flu shot has been shown to protect both the mother and her baby (up to 6 months age) from the flu." Ross adds that while many pregnant women do voice their concerns about having the flu shot during pregnancy, the vaccine is safe and can be given at any time.

You should also keep in mind that while your baby may not get sick in utero, the virus and its symptoms might lead to serious fetal health consequences. According to the March of Dimes, birth defects may be caused by the flu virus and Healthline noted that a mother's high fever can adversely affect the baby's health, leading to congenital defects.

If you do end up contracting the flu, then Meng says your doctor may send nasopharyngeal specimens to confirm the diagnosis. "For most of the cases, symptoms will go away after four to seven days with good rest, drinking plenty of fluid and taking Tylenol," she says. "Sometimes, your doctor will give you antiviral drugs if the symptoms are severe."

As a rule of thumb, talk to your healthcare provider about any concerns you have regarding the flu vaccine and immediately address any symptoms you think may be caused by the virus.

Because no matter the season, it's never a good time to have the flu — especially while pregnant.