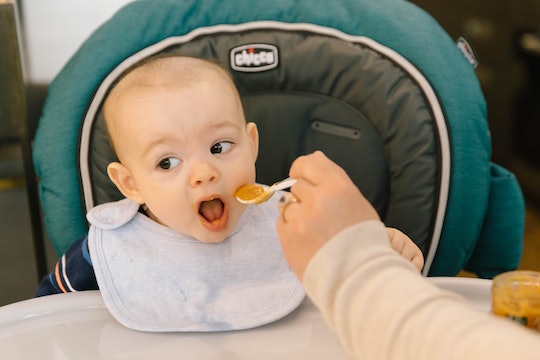 Yes, You Can Wean Your Baby Too Early & It Comes With Risks

Making the decision to wean your baby isn't an easy one. Many breastfeeding moms are reluctant to let go of the nursing period because they fear losing the special time they've cherished. Others are more than ready to stop nursing, but fear their baby might not be as excited about the transition. Wherever you fall on the weaning spectrum, there is a lot to know about the best ways to wean your baby and transition them to solids. Knowing what happens if you wean a baby too early is must-have info for moms, since there are several important drawbacks to starting the weaning process before your baby is ready.

To most moms, when you choose to wean your baby seems like a small decision. Different babies are ready at different times right? Yes and no. Although Mayo Clinic noted that the standard recommendation is to introduce solids at around 4 to 6 months old, most moms aren't aware of why those guidelines are in place at all.

As it turns out, weaning your baby too early can have consequences. Many experts, including those at Cleveland Clinic recommend waiting until your baby is fully 6 months before introducing any solids at all, especially if you plan to incorporate baby led weaning or give your baby foods that aren't pureed.

According to Cleveland Clinic, introducing solids too soon can deprive your infant of the rich nutrients of breast milk. No solid food, regardless of the ingredients, is as healthy or perfectly tailored to meet your baby's needs than your breast milk.

Aside from the nutritional "dangers," starting your baby on solids too soon can be physically dangerous as well. Parents noted that most babies don't master the "suck, swallow" reflex until they're at least 4 months old, and some even later than that. Giving your baby solids before they're mature enough to eat them can increase your baby's risk of choking on the food, even if it's just a puree.

Lastly, and perhaps most importantly, introducing solids too soon can increase a baby's risk of developing food allergies and other health problems later in life. The aforementioned Parents article noted that most babies' digestive systems aren't mature enough to handle anything other than breast milk or formula until they're 6 months old or so. Waiting longer to start them on solids ensures that the risk of developing allergies is as minimal as possible.

Although the decision is ultimately different for each parent, understanding the signs your baby is ready to begin solids and waiting until the recommended age can ensure that the transition from liquid to solid is as smooth as possible.

More Like This
10 Ways Breastfeeding Is Good For Moms, Too
20 Weird But Genius Health & Beauty Tools For Babies
Gathre’s Winnie The Pooh Collection Is Finally Here
Double Your Fun With These Instagram Captions For Twin Pics