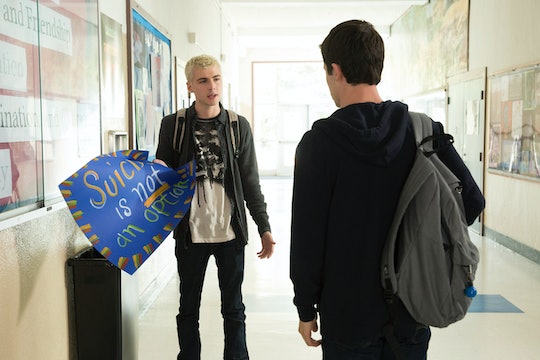 Alex's '13 Reasons Why' Story Is Very Different In The Book

Warning: spoilers from Episode 13 ahead! 13 Reasons Why tackles some truly tough topics, including depression, bullying, and teen suicide. However, by the end of the first season, Hannah Baker wasn't the only one who decided to end their life... or at least try. The finale revealed that Alex Standall shot himself in the head and is currently in critical condition. So now that his life currently hangs in the balance, some viewers may find themselves asking what happens to Alex in the 13 Reasons Why book? His fate has definitely been altered in a very big way.

The book varies in some very crucial ways from the series, particularly because a lot of the characters' storylines were expanded in order to properly fill 13 hours worth of episodes. So while fans of the show may feel like they have a pretty good sense of Hannah's classmates by the end of the season, the truth is that Jay Asher's novel didn't explore the side characters nearly as much. A big reason for that is because the book takes place only within the course of a single night. Clay may have taken his time working his way through the tapes in the Netflix adaptation, but in the book he listens to all of them in a single night. So the only time readers learn about the other classmates are when Hannah refers to them in the tapes. Their present day whereabouts and actions are a mystery.

Basically, we know nothing really about the book version of Alex. Sure, Tony mentions that he looks really bad when he sees him in school after hearing the tapes, but that's pretty much it. No suicide attempt is ever mentioned, which means it's a unique decision that the show creators made on their own. The only thing that stays the same in regards to Alex is the tape itself. He still made a "hot or not" list that sent Hannah and Jessica's friendship to a very dark (an almost nonexistent) place. He was also new to the school, which is how he bonded with Jessica and Hannah in the first place. But all of the extra details surrounding the character, especially in regards to the present day were completely created for the show.

So what does that mean exactly? It means that there's no way to determine what will happen to Alex next. If you were hoping the book could lend some insight into whether Alex lives or dies then prepare to be sorely disappointed. The book holds no answers because this never happened, so his fate lies completely in the show's hands. I only hope that the medics were able to get there in time to save him. But for now, it's a question we won't be able to see answered until/if the series gets renewed for a second season. Fingers crossed it does.