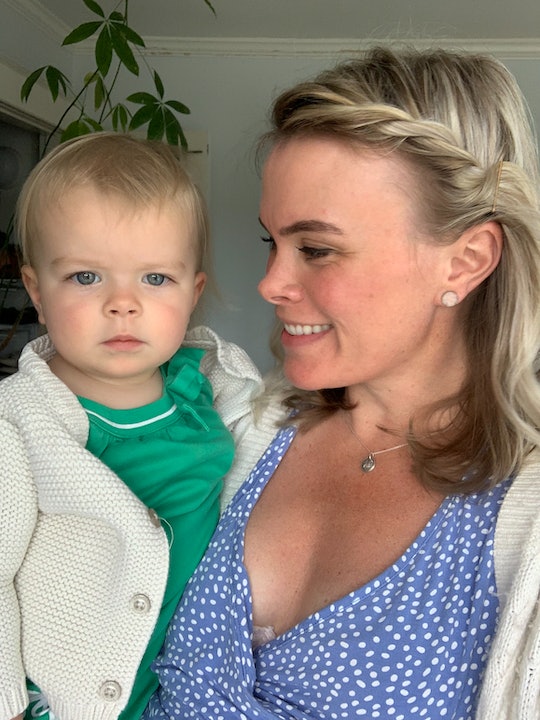 What Happens To People Pleasers When They Have Babies (Watch Out)

Early on enough in life, I realized I'd inherited my mom's charming and exhausting penchant for being a people pleaser. If your high-needs dogs needed tending while you were on vacation; if it was your birthday and your deepest desire was the homemade cake of your childhood; if you needed a meal, relentless emotional support, last-minute childcare, a ride to the airport, or your shift covered, I was your girl. And while many of those actions simply sound generous and supportive, I often completed them at the expense of my own sanity, personal time, or general well-being. Thirty-five years into life, I haven't figured out a lot, but I recently realized, to my great joy, that having a child has (mostly) upended my need to please.

Upon this revelation, I felt it prudent to do some expanding upon what the nomer "people pleaser" even really means, because, my goodness, if I was going to shed a label I had once assumed, I might as well really know all that I was shedding. My initial description here was of someone who goes out of their way to do for other people, but what Psychology Today describes as "people pleasing" extends much further. An online article describes someone who is overly apologetic, who feels responsible for other people's feelings, but rarely asserts their own, who generally avoids conflict or uncomfortable situations, and who needs praise to feel good.

Whoops. I am definitely a people pleaser.

She's allowed to have feelings, to not smile at everyone just because they're smiling at her.

However, yesterday I had my realization when I went to a bridal shower with my 18-month-old daughter, Melby. She strode in the door in her emerald green dress and powder blue ballet flats, looking the epitome of sweet baby girl. She has big blue eyes and a charming blonde mullet of still wispy baby hair. Every mom and hundred-year-old aunt and young cousin greeted her with smiling eyes and outstretched hands, eager to hold and love her like the sweet baby doll she appears to be.

And in response, she scowled and glowered and shouted a truly angry “NO!" in defiance.

The people pleaser in me would have been horrified, but the mildly exhausted and now at least kind of experienced mom in me, miraculously, did not panic or apologize. I sat down at the table with my girlfriend, who is expecting her first just a few months before I am expecting my second, and unloaded my great wisdom, "The hardest part of motherhood for me is not assuming Melby's behavior as my own. I won't let her be an outright jerk to people; I'll try to teach her to be kind and respectful, but she's allowed to have feelings, to not smile at everyone just because they're smiling at her. I have to constantly remind myself that I am not her."

I'm pretty sure what I actually said was less articulate and more full of expletives, but that is the general gist of it. And that assertion is, in essence, what has in many ways forced me, since becoming a mom, to stop being a people pleaser. The experience of seeming totally responsible for my daughter's existence — I literally created her body with my own and continue to craft her world through my interactions with her — yet also having no actual control over her is the immersion therapy version of not being a people pleaser.

Yes, I can remove her from a store if she's being a tyrant, yes, I am the one choosing her environment and food selections and clothing; I have control in that regard, but anyone who's ever asked their child to "Smile!" or "Say, 'mama!'" only to be met with furious opposition knows that, from the very get go, our children are not puppets. They are entirely their own creatures, often struggling for autonomy in a way that makes them seem beyond bananas, and, while they certainly need guidance and positive modeling, oftentimes the more we push them, the farther they spring in the other direction.

So I do not insist my daughter smile or coo at people, and, beyond that, I have learned not to apologize for her in the process. While her language is limited, that girl knows what is going on and I do not want her to think that her, in my mind, totally appropriate reaction to a bunch of strangers getting in her face is somehow not allowed, by making excuses for it in front of her. I totally acknowledge that having someone shout "NO!" at you with a look of horror on their face, even when said person is only 2-feet-tall and still poops in their pants, does not feel good to anyone, but I leave it to the adults initiating the interactions to understand enough about life to not take it personally.

On a similar level, sometimes Melby is acting a horror in public, and I am forced, again and again, to get over what people think about me. Just last week we were at the store; she was thrashing and screaming in the cart because she NEEDED MORE CHEESE from the sample area. I was too deep in my shopping and too destitute of food at home to abort the shopping trip altogether, so I just managed it. Yes, I said to the furtive sideways-eyes, I have no control over my daughter.

Sometimes I am just honestly too tired to care about anyone else's problems or needs.

The same thing has happened myriad times on cross-country flights. The same has happened when I, militant and unloving mother, won't let her run wild in the parking lot. The same has happened when we brave going out and her food is not immediately at the table upon being seated. I will tell her, "I know you're mad/sad/tired/really really need more cheese." I validate her, but I try not to apologize. (Side note: I do not exercise this policy in, say, nice restaurants. Girlfriend will definitely just get removed when the environment calls for it or allows. Believe me, I have wanted to parachute out of many a plane with this kid.)

And then, on a very practical level, motherhood has left me with not so much time to be a people pleaser. We can't make it to every party. We end up cancelling lots of plans because of rogue midnight fevers or surprise barfing in cars. We rarely leave the house after 6 p.m. Sometimes I am just honestly too tired to care about anyone else's problems or needs. Sometimes I'm only moderately too tired, but I just forget because my brain is made of applesauce. I tend to make minimal plans, and most often on the fly. We do activities when we feel like it, and we simply don't, when we don't.

I feel like motherhood has worn me down to just the right point that self-preservation and the well-being of my child are my priorities. I don't mean that to sound negative, even though it likely does, but rather to say, sometimes only having the energy to just get by is ideal for someone who once thought they had to do and be it all. Just like sometimes you get sick and suddenly all the making of balanced meals and vacuuming all the mashed-up Veggie Straws and creating of developmentally appropriate invitations to play are replaced by frozen waffles and watching Netflix for 46 consecutive hours without an iota of guilt, I sometimes appreciate the diminished (or increased, depending on your perspective) stamina that motherhood has afforded me.

Lastly, while I've addressed the aspects of people pleasing that include apologizing, saying "yes" to too many things, being responsible for other people's feelings, and avoiding uncomfortable situations, I haven't addressed maybe the most insidious aspect of people pleasing: desperately seeking praise.

Praise is something I was certainly raised on; I am highly motivated by external affirmations and encouragement, something I've been working on undoing for years and years. And in that regard, motherhood is a mixed bag. I can extend all my energy, patience, resilience, and empathy, only to have Melby scream in my face. I can plan for the most successful experience possible only to have it all fall apart. I can be calm through exhaustion, continue to put Melby first even when I’m pregnant and sick, put all my energy into making healthy, balanced meals, offer opportunities to explore and express and enjoy, and there is still no saying she’s going to be even the tiniest bit agreeable.

The positive feedback we are offered as parents is rarely commensurate with the amount of work we put in — at least in the short term. And yet, there are those moments, when she sees me first thing in the morning, her eyes, so much like my own, crinkle up with pure joy, she shouts, "HI MAMA!" I pick her up, and she kisses my face again and again, both of us almost gleeful, so happy to be reunited, to begin a fresh day together. That, that is enough for me. That I won't give up. I won't give up craving that unadulterated form of affirmation, though I will never demand it.

Really, clearly, it’s different. At the end of the day, I’ve let go of most of my people-pleasing tendencies, mostly out of necessity. There is no room for such frivolous energy, and honestly that’s not what I want to model for my daughter. I want to model behavior that is respectful and honest, both of myself and others. But that doesn’t mean that tiny bit of positive feedback that’s peppered throughout my days doesn’t flush through me like a beam of light and keep me going.

Motherhood has changed me in many ways, some for the better, some for the more saggy/baggy/tired, but, in this regard, I'm so glad for all my daughter's showing me: to be direct and unapologetic about who I am, to assert what I need more often instead of constantly giving, and to rely on an inherent sense of worth rather than constantly looking for affirmation.

Baby girl, I have learned so much from you.