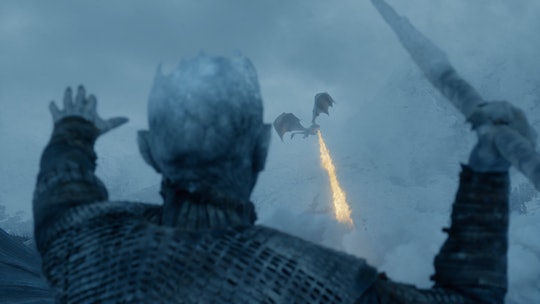 Ice Dragons Are Unfounded In The 'Game Of Thrones' Books

Episode 6 of Game of Thrones was one to remember, as it introduced a new development that many of us didn't want to consider: zombie dragons. Daenerys' dragon Viserion was impaled by an icicle spear thrown by the Night King (what an arm on that guy) and sank beneath the frozen lake that served as this episode's battlefield. But, as the final few moments of the episode teased, the world isn't done with Viserion, as the Night King then resurrected him in blue-eyed zombie form. Many fans of the series may find themselves wondering what happens to Viserion in the Game of Thrones books, and if there is any precedent for a wight dragon.

As most people are by now aware, the timeline of Game of Thrones has far surpassed the timeline of A Song of Ice and Fire. The last readers saw of Viserion and the other dragons was when they were still in Meereen. That's right — if you thought you were tired of Meereen, imagine how us book readers feel. We've been stuck there since Dany first arrived in the city in A Storm of Swords, published 17 years ago. The books basically left Daenerys' storyline at the same place as the Season 5 finale, "Mother's Mercy," when Dany found herself surrounded by Dothraki after flying away from Meereen on Drogon.

Fans have actually been predicting that the Night King would turn Viserion into an ice dragon for months, even years. Viserion is the dragon that Dany chose to name, somewhat perplexingly, after her abusive older brother Viserys. It makes more sense for that one to turn into a Wight than Rhaegal, named of course for Perfect Human Being Rhaegar Targaryen. Plus, while the Tyrion Targaryen theory is always a good one, the theory that the third prophesied dragon rider will be the Night King, along with Jon and Dany, is starting to overtake it.

The thing is, even though the broad strokes of the books and the show are supposedly the same, there's a lot there that could differ, and even with this new development, there's no way to know if it will be the same in A Song of Ice and Fire. "Beyond the Wall" was a reminder that the books and the show are actually very different, however much fans tend to conflate them. The Night King isn't a character in the books, and the "three-headed dragon" prophecy has never actually been mentioned in the show. It is possible that the show won't unfold in the way fans are predicting based on the books.

Either way, we now finally have an ice dragon. And though it's certainly sad that Daenerys lost her third-favorite child, I have to admit it's also kind of awesome.